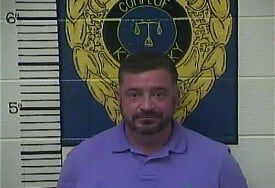 Clay County Sheriff Patrick Robinson is reporting that on August 7, 2020 at approximately 2:15 AM Clay County Sheriff Deputy Coty Arnold along with Deputy Wes Brumley and Deputy Jared Smith arrested William Disney, 39 of London. The arrest occurred on Highway 80 when Deputy Arnold was assisting Deputy Brumley on a traffic stop when the subject became disorderly and belligerent toward Deputy Arnold saying obscene remarks toward him. The above mentioned subject then became aggressive toward Deputies on scene. The individual was placed under arrest without further incident.

William Disney, 39 was charged with:

• Alcohol Intoxication in a Public Place