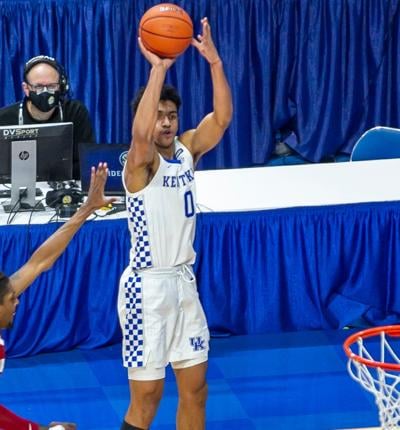 “We all knew that was an off night,” Jacob Toppin said Friday. “It was definitely an off night and that’s it. In practice yesterday, we were all going at each other and making each other better. We took a step back during that game, but now we’re taking a few steps forward and we’ve just got to keep preparing for the next game.”

The Wildcats, who opened Southeastern Conference play with three consecutive victories, including two on the road, will attempt to rebound from an 85-65 setback to the Crimson Tide at Auburn Saturday. Much like Alabama, the Tigers (7-6, 1-4) have the ability to score in bunches and are coming off a 95-77 road win at Georgia, ending a four-game losing streak.

“We know they’re a similar team to Alabama,” Toppin said. “We know they like to run the floor a lot. And these practices are just preparing for that. We didn’t do a very good job against Alabama, but we’re looking to do a better job against Auburn and that’s with preparation. That’s what we’re doing right now.”

The biggest difference for the Tigers during the past two games has been the play of freshman guard Sharife Cooper, who is averaging 28 points and 10.5 assists per game. Cooper scored 26 points in his debut at Alabama on Jan, 9, followed by 28 points and 12 assists against the Bulldogs earlier this week.

“He really sees things before they happen,” Kentucky coach John Calipari said. “He knows about what’s going to happen whether it’s a pass to a lob, whether it’s a skip. He’s a terrific player. And we recruited him, so I know how good he is. He’s a special (player). He’s got a special talent.”

Calipari responded to on- and off-the-court criticism prior to the team’s departure to Auburn on Friday and remained committed to his players.

“There are always people who are going to question,” he said. “That’s what coaching is. It doesn’t matter what you do, there are people going to say you can do it better or do it a different way. You could be playing (man-to-man) and be one of the best defensive teams in the country and you should be playing zone. You have a big team, but you should play like you have small guys. You have a small team, why don’t you post it? I mean, it’s just, if I listened to what’s coming out of the stands and I listened to it, I’ll be up there shortly. You just coach your team. When you focus on your team and you coach your team and that’s your focus, that stuff doesn’t affect you.”

Calipari also addressed criticism regarding his comments of support for his players after they kneeled during the anthem in protest in last week’s win at Florida.

“I know that I must be getting hit somewhere when I’m walking out of mass in the morning and a guy says, ‘Stay strong, Coach. Coach, you’re going to be fine.’ I’m like, 'What happened?'” Calipari said. “Who said what? And so, most of the stuff I don’t see. You guys could say I’m under total fire, I wouldn’t know that.”

The Kentucky coach added his main priority is “caring about kids.”

“When that is questioned I’ve got to, you know …  Anybody that knows me knows what I stand for and knows my beliefs,” he said. “And it doesn’t matter if I’m living in California, Texas, Kentucky, Florida, Boston ... my beliefs are what they are. I made the statement, ‘I stand by these kids. I believe in these kids.’ And they know that. You just, again, you march on. You do what you think is right. Normally what’s right isn’t always popular and doing what’s popular is not always right, and that’s why you’ve got to fall back on your faith and your belief system.”

Toppin added that “Coach Cal loves his players” and supports them on and off the court.

“He treats us like we’re his sons,” Toppin said. “He’s never going to be against us. He’s always for us and he’s always supporting us no matter what it is. That (the criticism) was nonsense. He’s definitely helped us through all of this. He’s definitely been there for us through all of this. He’s a great guy. He’s a great coach. So, anything else, it’s not good.”

OSCAR ON THE WAY

West Virginia transfer Oscar Tshiebwe hasn’t yet arrived on campus but Calipari expects the 6-foot-9 post player to make an immediate impact in practice even though he won’t become eligible until next season.

“We talked about that,” Calipari said. “I talked about what Enes (Kanter) did and how he got Josh Harrellson to another level. We even talked about, ‘I had another guy come in to help Nick (Richards), Ben Jordan. He had a job to toughen up Nick, to get physical, to do things to make sure your length, you’re all over Nick.’

“… maybe with him, I take five guys and those five are playing the top seven or eight guys and we start scrimmaging that way, even though it’s late in the season. It’s something that I’ve thought about when we get him.”

Calipari said  Tshiebwe is expected to join the team within the next five days.

Keith Taylor is sports editor for Kentucky Today. Reach him at keith.taylor@kentuckytoday.com or twitter @keithtaylor21