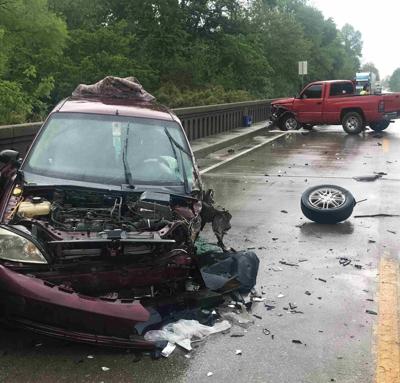 Laurel County Sheriff John Root is reporting that: Laurel Sheriff's Deputy Robert Reed along with Deputy Brent France arrested Benjamin Liford age 34 of Corbin on Friday afternoon May 22, 2020 at approximately 1:52 PM. The arrest occurred on South Laurel Rd., approximately 3 miles South of London after deputies were dispatched to a serious injury traffic crash there. Upon arrival at the scene, deputies determined that apparently Benjamin Liford had been observed weaving on the roadway when he traveled into the opposing lane striking another vehicle head-on. Lifford was operating a red colored Dodge ram pickup truck. The vehicle he allegedly struck was described as a maroon colored Ford focus driven by Audie Williams age 55 of Corbin.

She was trapped in the vehicle and had to be extricated and was transported to St. Joseph Hospital London for treatment of injuries. Benjamin Liford was determined to be under the influence and was arrested and charged with operating a motor vehicle under the influence – fourth offense. This individual was lodged in the Laurel County correctional center. No photo of this subject available at the Laurel County correctional center. Photos of crash site attached to this report. Other agencies assisting included Ambulance Inc. of Laurel County, Laurel County Fire Department, London Laurel Rescue Squad.