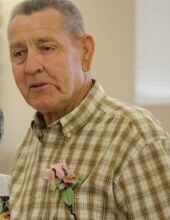 Earl was born in Clay County, KY on January 21, 1941, a son of the late Dan and Perlina Hornsby Owens. He was a member of the Clay County Cruisers.

He is survived by his wife of 58 years, Bessie Wilson Owens; and his two sons: Danny Owens and wife Quincie, and Earl "Country Earl" Owens, Jr. and wife Sherry, all of Manchester.

In addition to his parents, Earl was preceded in death by the following brothers and sisters: James Owens, Roger Owens, Paul Owens, Florence Roark, Anna Frazier, and Mary Catherine Owens.

Services will be held at 11:00 AM on Friday, April 9th at Britton Funeral Home, with Wendell Carmack and William Owens officiating. Burial will follow in the Oscar Hornsby Cemetery.

Visitation will be held at 6:00 PM on Thursday, April 8th at Britton Funeral Home.

To plant a tree in memory of Earl Owens as a living tribute, please visit Tribute Store.
Help us serve you better!

Box Turtles Are On the Move!

Reflection: Taken from the Berea Citizen May 7, 1964

FBI: Kentucky man arrested on charges from US Capitol riot