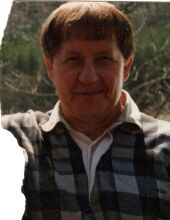 Earl "Mousie" Smith age 84 departed this life on Thursday, June 17, 2021. He passed peacefully at his home in the Burning Springs community.

Earl was born on January 14, 1937 to the union of Myrtle Sizemore Smith O'Brien and Hardin Smith.

Earl's life revolved around his family and friends. He worked for the volunteer fire department, Manchester Sales and Service, and Ferrel Gas. Earl enjoyed fishing, going to church, coaching softball, playing basketball with his kids and grandkids, spending time with family, and gardening.

Earl has gone on to his Heavenly Home to be with a multitude of his family and friends.

Services will be held at 2:30 PM on Sunday, June 20th at Britton Funeral Home, with Brad Stevens officiating. Burial will follow in the Smith Cemetery on Sextons Creek.

To plant a tree in memory of Earl Smith as a living tribute, please visit Tribute Store.
Help us serve you better!