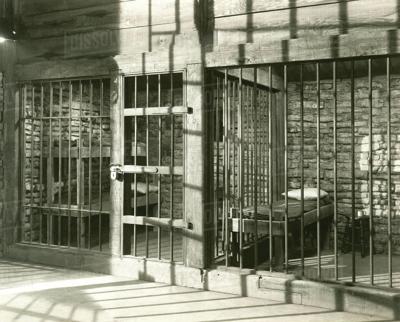 Headlines came out nationwide from 1915 through the early 1920’s about an Oneida man that killed his father and step-mother, killed a boxer in a prize fight in Texas, then staged a daring prison escape as a gang busted him out of jail.

It sounds like a script from a movie with saws being smuggled into the jail by the prisoner’s wife and a sheriff trying to use a ball and chain to hold him in a cell, but this wasn’t a plot for a movie it was the life of John D. Pace.

The saga started in November of 1915 when Pace, a former soldier in the U.S. Army wanted for desertion, was arrested for killing his father of the same name at their Bullskin home.

The father was shot three times through the chest and had also been beaten over the head with a blunt instrument.  The step-mother, Mahaley, was shot twice.  The only witness to the crime was Pace’s half-brother who was around two at the time.  Neighbors discovered the bodies due to the cries from the infant.  Pace and his father where to said to have been arguing over money.

Pace, 25, was lodged in the Clay County jail but in March 1916 he devised a plan for his escape.

Around 4 a.m. on March 25th, three prisoners said an armed mob of several men came to the jail and called to Pace telling him they had brought saws which he could use to sever the bars over a window and get out.

The men pulled guns and threatened to shoot anyone who might give an alarm, according to the prisoners.

The next morning 13 small saws believed to have been made of steel corset stays were found in the jail.  Jailer Joseph Lewis and most everyone in Manchester disbelieved the story told by the prisoners.  The jailer said he believes the saws came from a friend on the outside and gave them to Pace, possibly from his wife, and he sawed his way out.  He said he didn’t believe any armed men had came to the jail.

Authorities were holding Pace’s wife Mary on a charge of aiding a prisoner charged with a felony to escape.

Pace allegedly fled to Texas where he became a boxer.  According to newspaper reports there, Pace was accused of killing a fellow boxer during a prizefight.

The accused murder was caught in Jeffersonville, Indiana in 1920 on forgery charges.  He told authorities there that after he escaped jail he made his way to Canada where he enlisted in the Canadian Army and was wounded six times in conflict while on the French front, none seriously.

While being held in Indiana on the charges, Pace told authorities he did not kill his parents that he was so distraught over being accused, that he busted out of jail and fled.

“Following my time in Canada, I returned to the United States and wandered from place to place finding employment at bridge construction work,” Pace said.  “Finally I found myself in Buffalo, New York, where I obtained a good position, but was badly burned by a bursting steam pipe.  When I recovered sufficiently I decided to come west and started with a friend I had been working with.  He had a number of forged checks and he insisted I should take four of them.  We parted ways in Indianapolis, but I had not attempted to dispose of the checks as I still had a small amount of money I had come by honestly.  I began drinking substitutes for whiskey and decided I would return to Kentucky and stand trial on the double murder charge.  When I boarded a traction car in Indianapolis, I was sick from the compounds I had been drinking.  Just before the car reached Seymour I became so sick I thought I would die and decided to get off.  After the car stopped at Seymour, I got off and finally found a boarding house, but was so near broke I could not pay the woman who kept it in advance, as she demanded.”

“I told her I had a check for $86, and if she would endorse this she could get it cashed and I would pay my board.  She did so and the bank she took it to found it was a forgery.  I had not made haste to leave Seymour and was arrested, then taken to Brownstown, the county seat, where I pleaded guilty.”

Pace was brought back to the Clay County Jail from Indiana.

In February 1921 while in the Clay County Jail, Paces broke out for a second time.

Pace was the only occupant of the jail, knocked a hole in the bricks during the night and fled.

He stayed on the run for six months before being arrested in Grand Rapids, Michigan in August.  Headlines in the August 31, 1921 edition of the Louisville Courier Journal read, “Kentucky Houdini Again Behind Bars.”

He was arrested in Michigan on a charge of a forged check.  It was said he had planned to marry and it was for the sake of the girl that he attempted to pass the check.

Papers were prepared for Pace’s extradition and Sheriff McDaniel said, “I’ll put a ball and chain on him this time when he is brought back.”

No newspaper reports or record where found on Pace following his return to Clay County.  It is unknown if he stood trial for the murder of his parents.

Records show a John D. Pace was incarcerated in 1941 at the Huntsville Walker Texas Prison in Kosse, Texas for a charge of murder.  We know Pace was wanted in Texas over the death of a prize fighter that he killed during a boxing match but cannot confirm this is the same man.

Several people by the name of John D. Pace from Clay County where found while doing the research for this story, which made it hard to find the date of his passing.  A John D. Pace is buried in Laurel County and was from Oneida, Kentucky, which could be the same man.