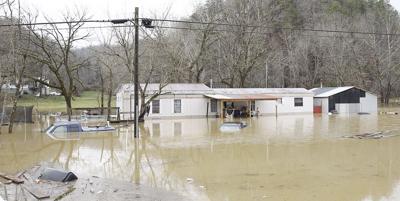 Families are currently being evacuated in the town of Oneida as flood waters are higher than residents have seen in years.

“We’re going to each residence and moving individuals out of the town,” he said.  “We’ve moved over six or seven so far.”

As of 10:30 a.m. Monday morning, the river was still rising in the small town.

Kenny Price, the former jailer of Clay County, has been a lifelong resident of Oneida and said the water is higher than he’s seen.

“I can’t remember seeing the water this high in a long time,” he said.  “The field behind my house never floods like what I’m seeing right now.”

Structural damage is occurring as water is in several homes in the town.

The new Oneida Post Office had at least one foot of water in it, according to Postmaster Amy Davidson.

The swift water rescue team has worked throughout the night on no sleep performing rescues all over the county.

“We’ve got several from cars stranded in the water and some from homes,” Weaver said.  “It’s been a long night and looks like it’s going to be a long day.”

All along Ky. 11 to Oneida the river was edging close to the roadway.

At Sol Hollow several homes are flooded and vehicles underwater.

We will have more updates throughout the day and in this week’s edition.