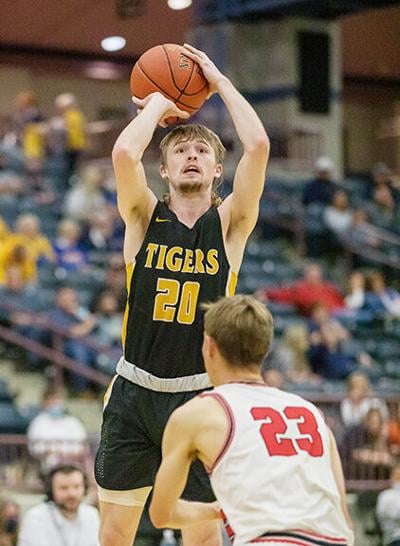 “He keeps us calm out there no matter the situation,” Gray said, after Clay’s 39-35 win over South Laurel in the opening round of the 13th region tournament.

“Tonight, he was really the glue that held us together,” Gray said. “You’ve got to give a lot of credit South Laurel as they fought us till the end.”

Like the character “Dalton”, each time the Cardinals closed the gap, Farmer’s cool demeanor took over.

“When we needed a bucket he (Farmer) found a way to get it for us,” added Gray. "We knew they were going to give Connor Robinson a lot of attention and I thought he defended well and rebounded like crazy, but I thought everybody really stepped up their game.  These two guys compliment each other very well."

Leading the Tigers with 20 points, Farmer put the finishing touches on a very hard-fought victory. Clay held a close 11-6 lead at the end of the first quarter, struggling to gain any offensive momentum in the slow-paced war. With each Clay bucket, South Laurel seemingly always found a way to keep the game within’ arms reach.

The Cardinals Micah Anders would drill two deep three pointers to cut into the Clay lead in the 2nd quarter, but Connor Robinson and Farmer both pushed Clay ahead with timely baskets. Robinson put in an acrobatic bucket as time expired to send Clay into the half with a 21-14 lead over the Cardinals.

The 2nd half told much of the same tale, as both teams were in the offensive doldrums. Extremely stingy defense was played by both squads, shots weren’t falling, and every basket mattered. The Tigers got a boost from Raven Abner (6pts) who scored first for the Tigers after halftime with a put back. Robinson finished with nine points and ten rebounds, a near double-double for the senior.

Leading 33-25 at the start of the fourth quarter, the Tigers did not score until the 2:15 mark, as Farmer nailed a jumper to push Clay ahead 35-29. Free throws and pressure defense were on display until the final horn sounded, with the Tigers pulling away behind four clutch shots from the charity stripe from Farmer. The Tigers now advance to meet Knox Central on Friday night at 7:30PM.