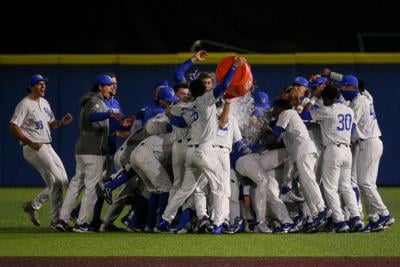 The University of Kentucky baseball team finished their 2021 season-opening homestand with a dramatic come-from-behind 6 - 5 win over Butler University. The victory vaults the Wildcats to 14 – 4 on the year, including an SEC opening weekend win against Missouri—their first conference opening weekend win since 2017.

Freshman Ryan Hagenow pitched four strong shut-out innings, giving up just two hits while walking and striking out three. Kentucky staked the right-hander from Knoxville to a 2 – 0 lead, before a finger injury forced him out prematurely. The Wildcats’ bullpen struggled for the second game in a row, giving up five runs through the middle innings.

Fortunately, the Cats’ bats came alive just in time in the bottom of the ninth. Senior Coltyn Kessler drilled a two-run double to deep left center field unleashing the jubilant victory celebration. It was the second walk-off win for Kentucky in the past three games.

“I was just thinking about passing the bat to the next guy,” Kessler said. “I got a good hanging pitch to hit, and I put a good swing on it.”

The Wildcats’ season thus far has been characterized by strong pitching (199 strikeouts to just 53 walks), timely power hitting (T.J. Collett’s 7 HRs and 22 RBIs), and a welcome dose of sophomore star power (John Rhodes and Cole Stupp). The top of the lineup has been in attack mode for most of the year, and team chemistry appears stronger than ever.

And yet, despite their successes, the feeling I get is that many outsiders are waiting for the team to stumble and fall. There’s an unspoken sense of impending doom as Kentucky prepares to enter the conference portion of their schedule.

Granted, we all know the SEC gauntlet is cruel and unrelenting. They take their baseball seriously in places like College Station, and Starkville, and Columbia, and Tuscaloosa. Having traveled around to many of those visitor venues, I’ve seen firsthand some of the palatial palaces erected through the coffers of passionate, deep-pocketed alumni. It’s hard to win consistently when your opponent cares more and spends more on baseball than you do.

The naysayers will say that all that doesn’t matter. Coach Nick Mingione was brought in to compete with the big boys, and thus far he’s struggling to deliver. The powers that be gave him a beautiful ballpark of his own, and they fully expected an ample return on their investment. A recent three-year contract extension, rather than calming public fears, has further fueled the debate of whether Mingione’s the right man for the job.

“You can never get inside someone’s head,” Mingione rationalized, when asked about the constant parade of critics. “You don’t know what someone’s thinking. The second you try to get in someone else’s head and try to figure out what they’re thinking and how they’re doing, that’s a lonely and scary place to be. My focus is on our team. I believe in my heart that if you play good and execute, you’re going to win baseball games.”

There’s only one way for Kentucky to silence their doubters. Just win, baby. Travel down to all those palatial palaces and beat those big spenders at their own game. Play hard, play aggressively, and scratch and claw your way to the top of the league standings.

“There’s no other way to do it than through your performance and your actions,” Mingione emphasized. “People tend to believe when they see it. [We need to] execute our system and our plan. Believe it, believe in ourselves, believe it will work—and obviously, the results should be good.”

It all begins this weekend at Auburn with a three-game series against the Tigers. For UK Baseball, it’s high time to buckle down.

Dr. John Huang is a columnist for Nolan Group Media and editor-in-chief of JustTheCats.com. His new book, CUT TO THE CHASE, is now available on Amazon. If you enjoy his writing, you can follow him on Twitter @KYHuangs.

From Our House to Yours….