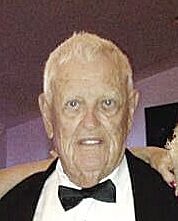 Former mayor and successful businessman Jack White passed away Thanksgiving Day in Marathon, Florida after a long illness.  He was 89.

White followed in the footsteps of his father Joe (who was mayor of Manchester for 16 years) and served as mayor from 1970 to 1976.  He was succeeded as mayor by his younger brother Daugh.

Mr. White was instrumental in expanding the city water system to serve residents of Clay County and helping secure new industry to the county.  At the time of his retirement as mayor, Manchester had several working factories within city limits.

Mr. White may be best remembered as successful businessman in Manchester as part-owner of White Chevrolet-Pontiac, the car dealership started by his grandfather and continued through his father to him and his siblings.

Jack White was an Army veteran and college graduate.  He served as a teacher for one year at Clay County High School before entering the car business full-time.

While in school, Mr. White spent time working afternoons and Saturdays at Clay Motors for his father along with his younger brother.

Mr. White as a director of First State Bank of Manchester for many years and one of the bank’s largest stockholders.

He retired from the car dealership and moved to Marathon, Florida in the 1990’s.

He is survived by his daughters Pearl Roseanne Velkovic, of Miami, Florida; Scarlett Ryan and Liza Thomas, both of Winchester.