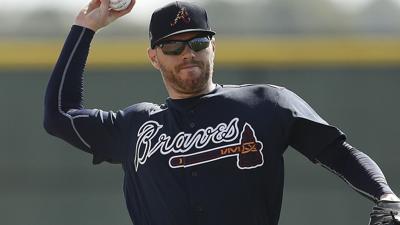 ATLANTA -- Knowing Opening Day was quickly approaching, Freddie Freeman was frustrated, and his frustration grew with each day that passed with him symptom-free but without the negative test results he needed to rejoin the Braves.

His demeanor changed on Friday morning, when he grabbed his buzzing phone and heard trainer George Poulis say, “You just hit a home run.” Asked to explain, Poulis said, “You got back-to-back negatives.”

Having received negative results from the COVID-19 tests performed on Tuesday and Wednesday, Freeman raced to an Atlanta-area hospital 45 minutes later for a comprehensive cardio exam and blood tests. He gained clearance three hours later and immediately went to Truist Park to take batting practice and field some grounders.

“I FaceTimed my dad before I went to the field and he said, ‘Freddie, you look really, really excited,” Freeman said. “I said, ‘Dad, I feel like I’m a kid in a candy store again.’ You forget how much you love this game. When it gets taken away from you, I really did truly miss it. I was just so excited to come to the yard.”

Those who have watched how much fun Freeman has had while serving as the Braves' first baseman over the past decade have a sense of how much he was crushed to get sick on July 2 and then test positive on July 3, the same day the Braves staged their first Summer Camp workout.

Excitement about being reunited with the game and his teammates for the first time since March was replaced with concerns about himself and his family members. He’d been in contact with his dad and grandfather before leaving his California home on June 29.

Fortunately, they were fine. So, too, was Freeman’s wife, Chelsea, who tested positive but didn’t experience more than “mild body aches.” His aunt also dealt with a couple days of fever.

As for Freeman, he is now two weeks removed from one of the scariest nights of his life. His fever spiked to 104.5 degrees after he went to bed on July 3. He contemplated going to the hospital and feared what might happen if he fell asleep.

“I said a little prayer that night,” Freeman said. “I’ve never been that hot before, and my body was really, really hot. So I said, ‘Please don’t take me.’ I wasn’t ready. It got a little worrisome that night for me.”

Freeman’s concerns decreased when he awoke around 7 a.m. on July 4 to see his fever had dropped to 101 degrees. This was closer to the temperature he battled two days earlier, when he started to get sick and quickly realized he was dealing with more than simply his body clock readjusting to the East Coast.

Freeman had tested negative for COVID-19 when the Braves performed his intake test on June 30, so he wasn’t thinking about coronavirus until he saw his temperature was 102 degrees on July 2. This prompted him to immediately visit an Atlanta hospital for a nasal swab test.

Approximately 24 hours later, he learned he had tested positive. Between taking the test and getting the result, his temperature briefly returned to normal, but after taking some swings and working out at his house, he quickly fatigued and went back to bed.

He ran a fever for a little more than three days, then dealt with what he says felt like a sinus infection over the four days that followed. Finally, the fatigue disappeared, and he started to feel like himself by July 9.

“I woke up that day not feeling that great again,” he said. “I took a nap and then when I woke up, I told my wife, Chelsea, ‘I feel absolutely great. I need carbs, though. Get me carbs.’ So I ate Italian food, and I’ve felt perfectly fine since then.”

But even though he felt fine, Freeman still had to wait another week to get the two negative results needed at least 24 hours apart to be cleared to return. He was testing on a daily basis and staying up past midnight, because he had learned some of the results were sent to Poulis around 1:30 a.m. ET.

Thought he grew frustrated this week, Freeman recognizes that his wait was shorter than it’s been for others. Touki Toussaint and Will Smith were both asymptomatic when they tested positive on July 3. Toussaint just got clearance to return on Friday, and Smith still hasn’t gotten the necessary results.

“It’s been a wild ride,” Freeman said. “I’m a little shocked I’m here as soon as I am with all the information I’ve been given and friends I’ve talked to who have had it.”

Now the question is whether Freeman will have time to be ready for Friday’s Opening Day game against the Mets in New York. He plans to tally about five or six at-bats per day, as the Braves are scheduled to play intrasquad and exhibition games through Wednesday.

“If he’s out there, he’ll be ready,” manager Brian Snitker said.

With the designated hitter in place, Snitker could take advantage of some opportunities to rest Freeman’s legs during the early portion of the regular season.

As for Freeman, he recognizes that Opening Day might have been out of the question had he had to wait one more day to get the negative results, so it’s not like he has much room for error. But the excitement of being back will most likely lead him to be in the lineup for the season opener.

“I think the adrenaline is going to take over,” Freeman said. “I’m so excited to be here and I feel great.”

Mark Bowman has covered the Braves for MLB.com since 2001.

Bell County School Board will have special called meeting Monday