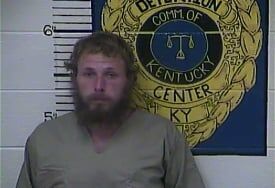 Clay County Sheriff Patrick Robinson is reporting that on July 13, 2021 at approximately 8:50 PM Clay County Sheriff Deputy Jared Smith arrested Joshua Frost, 28 of Bar Creek Road.
The arrest occurred at a business off of South Highway 421 when Deputy Smith received a complaint that a potential stolen ATV was in the parking lot along with the operator still inside the store. Upon arrival, Deputy Smith made contact with the above mentioned subject who was shown to have a warrant for his arrest out of Clay County District Court. Once the VIN of the four-wheeler was ran it was confirmed stolen out of Clay County.
Assisting at the scene was Kentucky State Police Trooper Jarrod Smith, Trooper Tyson Lawson, City Police K9 Officer Ryan Jackson, Officer Jeff Couch and Officer Antonio Dodson.
Joshua Frost, 28 was charged with:
• Receiving Stolen Property
• Serving Bench Warrant for Court
Help us serve you better!