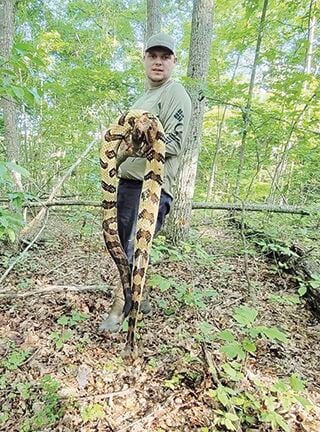 Checking a wild game camera turned into quite the adventure for two men over the weekend.

Daniel Gay and Brian Napier were in the Bullskin community checking their cameras when they discovered something nobody wants to find—a large rattlesnake!

Napier nearly stepped on the large snake, startling both men.

Gay said he usually doesn’t “mess with snakes” but the rattler was located right under his deer stand.

“I usually don’t mess with snakes, but it was right under one of my tree stands, so I was afraid to walk to it in the dark next week when deer season opens knowing it was there,” he said.

With no weapons of any kind in their possession, Gay and Napier looked for something to kill the snake with.

With one hard whack, Gay killed the giant rattler with one lick to the head!

“I literally hit it in the head,” Gay said.  “Probably not one of the smartest decisions of me.”

Napier said he can attest it was only one hard lick.

“From a safe distance I observed him,” he said with a laugh.

The men estimate the snake was probably five feet long with part of its rattle missing.

“It was broke off after the fourth rattle,” Gay said.

When asked if the large snake would deter them from next weekend’s archery season opener both men had one reply— “no way!”