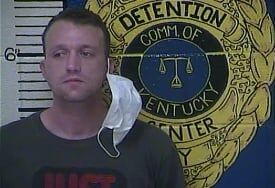 On January 05, 2021 at approximately 1:50 PM Clay County Sheriff Patrick Robinson along with Chief Deputy Clifton Jones arrested Ryan Gibson, 32 of Charlie Sizemore Road. The arrest occurred when Sheriff Robinson and Chief Deputy Jones were dispatched to a complaint of domestic violence involving an automobile. Upon arrival, Chief Deputy Jones conducted an investigation at which time determined that the above mentioned subject attempted to run over a female victim and then physically struck her. The subject was located in a field attempting to hide from Sheriff Robinson and Chief Deputy Jones. During the arrest, Chief Deputy Jones located suspected Methamphetamine on the subject’s person.
Ryan Gibson, 32 was charged with:
• Assault 2nd Degree (Domestic Violence)
• Resisting Arrest
• Menacing
• Public Intoxication of a Controlled Substance (Excludes Alcohol)
• Possession of a Controlled Substance 1st Degree (Methamphetamine)
We need your support