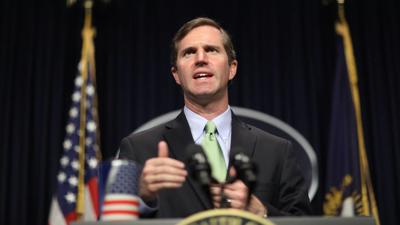 Just yesterday, the Governor announced he was working with Govs. Eric Holcomb of Indiana and Mike DeWine of Ohio. Now four more governors – Tony Evers of Wisconsin, JB Pritzker of Illinois, Tim Walz of Minnesota and Gretchen Whitmer of Michigan – are joining forces to closely coordinate plans to reopen the regional economies when the time is right.

“This is making sure that we are working with our neighbors and doing the right thing by our neighbors,” Gov. Beshear said. “While I always say we are in this together as Kentucky, we are now in this with some other states to make sure we are working together in our steps to phase in different parts of our economy.”

The Governor stressed that each leader ultimately would decide what is best for their state, but said the coordination will prevent new outbreaks of the coronavirus and would provide stability for business owners.

“While it will be the decision of each individual state the steps they take, this is going to help us both on the public health side and making sure that while it will be in a phased-in approach as we are opening up our economy we do it in a way where we can have that symbiotic bump,” Gov. Beshear said.

One key to restarting business activity and paving the way back toward more normal activities is widespread testing. In a move toward that goal, Gov. Beshear announced Thursday an expansion of the state’s partnership with Kroger to provide drive-through testing for the coronavirus.

Testing has been under way this week in Franklin and Kenton counties. The Governor said four new sites would come online next week, in Madisonville, Paducah, Somerset and Pikeville.

“This is making sure we can serve all parts of the state,” he said. “We are one Kentucky, we are Team Kentucky and we’re making sure now that we can test in all of Kentucky.”

Testing at the new sites will be done from 8 a.m. to 5 p.m. Tuesday through Thursday. For location details or to register for a test, visit KROGERHEALTH.COM/COVIDTESTING.

“Kroger is committed to expanding our drive-through testing sites in other locations to provide this vital need to increase the health and wellness directly in our communities,” said Meegan Brown, National Health and Wellness TLC Director of Kroger Health.

The testing is done free of charge. The overall goal of the partnership is to conduct 20,000 tests over the next five weeks. Test results are expected within approximately 48 hours.

Dr. Steven Stack, commissioner of the Kentucky Department for Public Health, praised Kentucky company Gravity Diagnostics Labs for their work ramping up testing in the state.

“They have done wonderful and heroic work for us,” Dr. Stack said.

Gravity Diagnostics CEO Tony Remington hailed his employees’ hard work and said he was glad his company can be of help during a challenging time.

“I’m extremely honored and humbled to be part of the solution that’s facing all of us across the country, especially in Kentucky,” Remington said. “I’ve been amazingly impressed with the way the private sector and the government have come together at the city, county, state and federal levels.”

Gov. Beshear announced the opening of state facilities to house people ill with or who may have been exposed to COVID-19.

Initially, the shelters will be available at Lake Barkley and Lake Cumberland state parks.

The facilities will be made available to “low-acuity” patients or guests – those who can care for themselves with minimal medical intervention.

“These are not places we are going to put people who need significant care and significant monitoring,” the Governor said.

The shelters are being made available for people who need to be isolated but lack their own homes, cannot self-isolate within their homes or live with people at heightened risk of contracting the virus.

“Sometimes people don’t have a home or a home where they can be isolated from others,” Gov. Beshear said. “This provides an opportunity for a person to have a place to go so we are not spreading the virus.”

“That’s lower than we’ve had some other days and I know yesterday we had a lower amount,” the Governor said. “But we believe tomorrow is going to be one of the highest numbers we’ve seen, and part of that is bringing in some data that’s had to move through a couple of systems that will hit tomorrow.”

The Governor said one of the victims was a 10-day-old infant.

“So let’s continue to send our thoughts and prayers out,” he said.

Gov. Beshear continued to encourage Kentuckians to light up their homes and businesses green for those we have lost as a sign of compassion and renewal.

At least 956 people have recovered from COVID-19 in Kentucky.

“That is really exciting,” Gov. Beshear said. “We’re thinking about all of those folks too.”

“One of the bright notes in all of this is how well our hospitals have done stabilizing people and getting them out early,” the Governor said. “It’s one of the things that make us feel much better about the ability of our health care capacity to handle a spike in cases.”

At least 506 have ever been in the ICU with at least 333 people currently in the ICU.

Gov. Beshear also offered an update on the racial breakdown of COVID-19 patients, which has been the subject of news stories across the country because of the disparity.

The Governor said with about 75% of the known cases accounted for, 80.12% of Kentuckians who tested positive were Caucasian, 11.75% were African-American, 4.99% were multiracial, 3.08% were Asian and 0.07% were Native American or Alaskan Native.

On fatalities attributed to the coronavirus, with about 81% of the known cases accounted for, Kentucky deaths are about 78.1% Caucasian, 20.95% African-American and 0.95% Asian.

“Again we see unequal access to health care. We are working on efforts that will include testing … specifically in our African-American communities in our two largest cities. We need to make sure we are directing resources where people are being hit hardest, and I want our African-American communities to know that we are committed,” Gov. Beshear said. “While we can’t immediately erase the wrongs of the past, we can do the best that we can to do the right thing in the present and moving into the future. I hope that out of this we can take the calling, the requirement to finally end some of these injustices.”

The Governor is asking all Kentuckians to continue to fight the spread of the virus by following his 10-step guidance, which includes practicing social distancing and staying healthy at home. Gov. Beshear says these efforts have the potential to save the lives of as many as 11,000 Kentuckians.

The U.S. Centers for Disease Control and Prevention (CDC) encourages people to follow these steps to prevent illness. Kentuckians who want advice can call the state hotline at 800-722-5725 or call their local health care provider.

Little League is Back on Track!