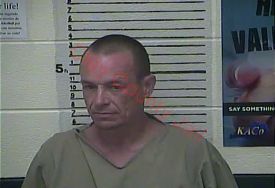 The arrest occurred when Deputies received a complaint of a possible domestic. Upon arrival, Deputies noted that the above-mentioned subject took off on foot behind the residence. After a brief foot pursuit the subject was apprehended, when deputies attempted to place the subject under arrest the subject became aggressive and combative. The subject was placed under arrest without further incident. Through investigation it was determined the above-mentioned subject had been involved in a physical altercation with a female subject. Assisting at the scene was Manchester City Police Officer Chris Curry.

Jess Hatfield, 45 was charged with: