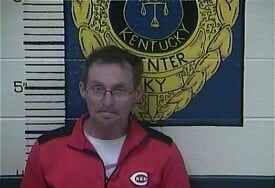 Clay County Sheriff Patrick Robinson is reporting that on April 4, 2021 at approximately 10:40 PM Clay County Sheriff Deputy Jared Smith along with Deputy Wes Brumley arrested Leslie Henson, 46 of Hacker Lane. The arrest occurred on Highway 638 when Deputies were dispatched to a complaint of a male subject sitting on an ATV in someone’s yard. Upon arrival, Deputies noted the subject showed signs of intoxication and couldn’t explain where he was or what he was doing. Through investigation it was determined the subject was manifestly under the influence. During the search of the subject, Deputies located a plastic vial containing suspected methamphetamine along with tablets.
Leslie Henson, 46 was charged with:
• Public Intoxication of a Controlled Substance (Excludes Alcohol)
• Possession of a Controlled Substance 1st Degree (Methamphetamine)
• Possession of a Controlled Substance 2nd Degree- Amphetamine
Help us serve you better!