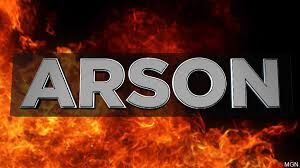 A Little Creek woman is in jail following a trailer fire Sunday on Red Bird.

The Big Creek Fire Department was dispatched to a house fire on Little Creek Road around 10 a.m.   When fire department members arrived the house was fully engulfed in flames.

Witnesses at the scene claimed a woman had set fire to the home and fled.  Kentucky State Police Trooper Wayne Hensley was dispatched to the scene to investigate.

According to the citation, Vicky Roark, 36, had allegedly set the house on fire and fled the scene.  Neighbors said they had last seen her walking towards Ky. 66 or she could be in a trailer across the road.

The trooper found Hensley located in a back room of the trailer and he asked for her name.

She stated, “I’m Vicky, the one that set the house on fire.”

She was placed under arrest and taken to the Manchester Police Department for an interview where she was read her Miranda rights and agreed to talk.

During the interview, “she did in fact burn the residence of 438 Little Creek Road.   When asked why she burned the home she stated, “my brother tried to run me out of it and if I can’t live there no one is going to.”

She was charged with arson 2nd and lodged in the Clay County Detention Center.