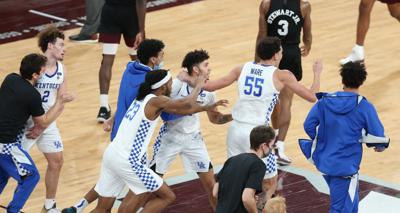 (STARKVILLE, Ms.) – For Coach John Calipari and the Kentucky Wildcats, the 78 – 73 double overtime thriller over the Mississippi State Bulldogs signified a brand-new beginning. Forget that the team had gone 37 days—the longest winless span within a season in UK history—since that long-forgotten rout of Morehead State. Erase from your memory banks that the Wildcats then went on to lose six straight games—the longest losing streak in over 30 years. Put to rest also that UK’s dismal 1 – 6 stumble out of the gate was the worst for a Kentucky team since Coach Basil Hayden cobbled together that 1 – 8 start back in 1927.

Forget all of that. Because this victory—or any victory for that matter—was certainly a much-needed salve for a painful, festering wound. A hard-fought road conquest over a conference opponent was just what the doctor prescribed for a team teetering on life support. Toss in a well-timed—and perhaps well-orchestrated—ejection of Coach John Calipari midway through the second half, and you’ve got enough drama for a Hollywood epic.

The hero of the night was none other than Dontaie Allen. The sharpshooting guard from Pendleton County saved the day by coming off the bench to score a storybook-like 23 points on 7-of-11 three-point shooting. For Dontaie, it was a dream come true. For the rest of the Kentucky fan base, it was the stuff that legends are made of.

“It feels crazy,” Dontaie admitted afterwards. “But if there are any kids listening in the state, it comes down to work. If you put in the work, you can do some great things. Just put in the work and all your mind, and body, and soul into it.”

So where do we go from here? In Kentucky, we measure success by way of national championships. We know nothing of losing records, conference mediocrity, or bad tournament seeds. And yet, BBN now suddenly finds itself in unchartered waters. Can Kentucky make up enough ground to even make the NCAA tournament come March?

“Absolutely we are,” Calipari answered, when asked if he were still coaching for the NCAA tournament in March. “Nothing has changed. My mission through all this—my heart—has not changed…We’re 1 – 0 in our league. Everybody that’s watched us knows how close we were. Our fans will go crazy—and they have a right to, it’s Kentucky. But everybody else is looking and saying, ‘You guys are right there.’”

With the win, Kentucky improves to 2 – 6 overall. More importantly, they’re 1 – 0  as they begin the slog through the predictable conference grind. With a dearth of quality league opponents left on their schedule, it’s doubtful the Cats can make enough of an impact with their resume to impress the selection committee. For now, Tennessee and Missouri are the only ranked SEC ball clubs. Wins against the Vols and Tigers—plus another in the SEC/Big 12 challenge versus Texas—appear to be a bit too much to ask for this group of top-ranked prodigies.

Even if Kentucky were to win two-thirds of their remaining SEC games (go 11 – 6) and beat the Longhorns in their remaining out-of-conference challenge (1 – 0), that would still only leave them with a 14 – 12 overall record. Is that good enough to make the Big Dance? I doubt it. I’m thinking the team would need to go at least 14 – 4 the rest of the way to even stand a chance. With what we’ve seen from them so far, that’s highly improbable.

But who really knows? This pandemic-prejudiced basketball season has been like no other. There’s an excellent chance that tournament selection will be highly variable. It could also be greatly expanded. The most important criteria may just be for teams to be playing well when Selection Sunday dawns.

Kentucky needs to just keep focusing on improving game by game. With a few timely victories, they can gain enough confidence and momentum to be peaking toward the end of the regular season. Forget the won-loss record altogether. A tweak here and there, and the Cats win the SEC tournament title and secure an automatic tournament bid into their bracket of death.

From there, they write a storybook ending on their march towards title number nine.

Stranger things have happened on the Road to the Final Four. Keep the faith. Remember, it’s not how you start—it’s how you finish.

Dr. John Huang is a columnist for Nolan Group Media. His new book CUT TO THE CHASE is now available on Amazon. If you enjoy his writing, you can read more on www.huangswhinings.com or follow him on Twitter @KYHuangs.