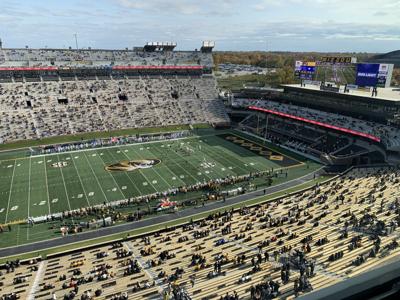 (COLUMBIA, Mo.) – Kentucky’s 20-10 loss to the Missouri Tigers was more than just an irritating defeat to a less-talented opponent. Sadly, any goodwill regained over the past two games was quickly flushed away in a puzzling dud of a performance. After two spirited efforts to get back to .500, the Wildcats defense couldn’t get off the field while the offense remained missing in action. With the mighty Georgia Bulldogs paying a visit to Kroger Field next week, this season is officially back on life support.

This one was hard to figure. Still frisky over the Vol-thrashing in Knoxville last week, the Cats evidently didn’t feel the need to show up in time for kickoff. After failing to get anything going offensively—and trailing 7-0—starting quarterback Terry Wilson was pulled in favor of Auburn transfer Joey Gatewood five minutes into the 2nd quarter. On their first possession with Gatewood directing the attack, Kentucky put together enough of a drive for a Matt Ruffolo 50-yard field goal to pull within 7-3.

That flicker of life was short lived. With the exception of a single drive in the 2nd half—culminating in a 26-yard Terry Wilson to Josh Ali touchdown—Missouri dominated the rest of the game. Dominated may just be an understatement.

The final stats were far uglier than the final score. Missouri outgained Kentucky 421-125 in total yards, ran 92 plays to Kentucky’s 36, and thoroughly hogged the time of possession 43:10 to 16:50. Not going to win many games with performances like that.

“It’s really even difficult to put into words because it’s been a long time since we’ve had a game like that. We were beaten in every area. No ifs, ands, or buts. They just kicked the tail out of us from the beginning to the end.”

Even with the disparity, Kentucky still had a chance to tie in the fourth quarter. Inexplicably, the Wildcats best back, Chris Rodriguez, failed to touch the ball on the crucial potential game-tying series.

“We [our defense] needed to get off the field,” Stoops said when pressed about the lack of a running game. “We let them mush us too long. Partly, offensively when you’re not getting first downs, it hurts your defense, but that was only part of it today. We gave up way too many yards. We were getting pushed around from the beginning of the game.”

Next up is Georgia—not the most favorable opponent coming off a clunker like this. The Bulldogs are coming off a tough thrashing of their own at the hands of Alabama. Kirby Smart’s squad, however, just had their bye week and will have had a couple of weeks to regroup for the Halloween visit. Georgia leads the all-time series 59-12-2, so even in the best of circumstances, Kentucky rarely pulls out the win. As a matter of fact, the Wildcats have lost ten straight, and Stoops is 0–7 in his time at Kentucky. With road games at Bama and Florida still on the docket, the Cats will need to dig deep and respond.

Can they do it? Perhaps. In this roller coaster of a season, I’m not ruling anything out. One thing’s for sure—they won’t have a chance if they pull another dud like the one we saw today.

Dr. John Huang is a columnist for Nolan Group Media. His new book, CUT TO THE CHASE, is now available on Amazon. If you enjoy his writing, you can follow him on Twitter @KYHuangs.