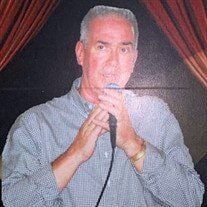 WILLIAMSBURG - James Arthur King, age 77, passed away on October 10, 2020. He was born on February 17, 1943 to the late Ben and Rosa (nee Barrett) King. James was the loving father of Joseph King and Lisa King; cherished brother of Leonard (Doc) King and Ruth Tincher; and is additionally survived by several nieces, nephews, and friends. In addition to his parents, James was preceded in death by brothers Isaac King, Hubert King, Dennis King, Denver King, Blaine King, Earl King, Paul King, and Darrell King; and sisters Lydia Boggs and Lola Miles. A private graveside memorial service for James will be held at a later date.

The family request no flowers, and asks instead that a donation be made to a charity of their choice in honor of James.
To plant a tree in memory of James King as a living tribute, please visit Tribute Store.