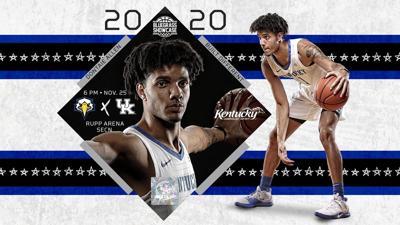 No. 10 Kentucky tips off the 2020-21 season on Wednesday evening against Morehead State in the first game of the Bluegrass Showcase, a multi-team event that will be hosted at Rupp Arena during Thanksgiving week.

Kentucky has an almost entirely new roster again this season, although the Cats do have some experience. The addition of transfers Davion Mintz and Olivier Sarr will help Kentucky have a veteran presence on the floor as the season begins.

Sarr knows that it's important for he and Mintz, along with UK returnee Keion Brooks Jr., to step into leadership roles for this team.

"Keion did a great job so far being on the sideline, talking to the guys, being a leader because he knows, he's been through it already," Sarr said. "I think for Davion and I, it's going to be a responsibility for the first few games. It's going to be on us to make sure that everybody is locked in, making sure that we huddle up every time we can and talk to the guys, guide them and lead them through the first few games."

"It's tough to kind of say that I replace responsibility for a guy like Keion (Brooks Jr.), a guy who was significant to a really good team last year and a guy who has been very mature for us," Mintz said. "Even though he hasn't had his presence with us on the court, he has been doing a lot of things off the court as far as team meetings. So, I'm still learning the type of things from him, although he's younger than me, but he's just been here and has a sense of knowing."

Mintz and Sarr will be joined by the nation's number one recruiting class, which features the annual wealth of talent that Calipari and his staff bring to UK.

In the front court, the Cats have Isaiah Jackson, a forward who has been impressive in fall camp and who showed off his dunking skills at Big Blue Madness. Cam'Ron Fletcher and Lance Ware are also newcomers to the front court. Jacob Toppin, who transferred from Rhode Island, could also be in the mix, as will Brooks, who is expected to miss this weekend's games while tending to a leg injury.

The back court is also an impressive group for this year's Cats. Brandon Boston Jr., a 6-7 shooting guard, figures to be one of the best players in the SEC this season. He was named preseason first-team All-SEC last week. Joining Boston is Terrence Clark, another 6-7 wing, and point guard Devin Askew.

The Cats have spent weeks practicing against themselves and they are ready to face an actual opponent.

"Yeah, I think everybody is just ready to go out there and compete for Kentucky against another team," Sarr said. "I think it's been great. We worked out a lot. It was a great summer, a lot of practices together. But I think guys are definitely ready to play another opponent."

That opponent will be Morehead State, which will make the trek down I-64 to Lexington to face the Cats. MSU is led by Preston Spradlin, who was on Calipari's staff at UK before taking the Morehead State job.

Morehead State has never beaten Kentucky in 10 tries historically. The Eagles have their own version of a youth movement this season, with only one senior on the squad.

As for Calipari, he is worried that his team has not had any exhibition games, not even a Blue-White scrimmage, to prepare for this week. He's not sure he has a feel for this team just yet.

"I'm not worried about giving people a feel, I'm worried about giving me a feel," Calipari said. "Like, what is this team? And so, no exhibition. We've scrimmaged in the past (Blue-White). We've had none of that. They've only played against themselves. They're tired. They're playing our plays, if you know what I'm saying. They know what the plays are. They're playing against each other. And so, it's hard to make a pass."

Calipari and the Cats are hoping that the leadership provided on the court by Mintz and Sarr, as well as the leadership Brooks continues to provide from the bench, can help pull this young group along as they continue to learn.

The schedule for the Bluegrass Showcase was adjusted after Detroit Mercy had to pull out of the multi-team event due to COVID-19 safety protocols.

As previously scheduled, UK will play Morehead State on Wednesday at 6 p.m. in Rupp Arena (SEC Network) and Richmond on Sunday at 1 p.m. in Rupp Arena (ESPN). Friday's game vs. Detroit Mercy has been postponed. The Titans will not participate in any games this week.

The teams, in coordination with the Gazelle Group, will attempt to reschedule the games later in the season between the participating schools. The schedule for this week's Bluegrass Showcase is now as follows:

Current tickets for Kentucky's games on Wednesday and Sunday will remain in place. Ticket information for Friday's game between Richmond and Morehead State will be announced once those details are finalized, and ticket holders will receive further communication by email regarding the status of Friday's tickets.

UK has won 10 of 11 in season openers under John Calipari and the program is a perfect 11-0 in home openers in Rupp Arena under Calipari. Kentucky's lone season-opening loss in the Calipari era was in 2018-19, which snapped a nine-game winning streak that began when Calipari took the job. Prior to that loss, Calipari-coached teams had won 14 straight regular-season openers dating back to his time at Memphis.

Calipari Does Not Expect Brooks to Play

Sophomore forward Keion Brooks Jr. -- the only returning scholarship player who played a season ago -- is officially day-to-day with a leg injury, but Kentucky head coach John Calipari all but ruled him out on Monday in a videoconference with reporters.

"I do not believe he'll be here the first week," Calipari said. "It's day-to-day kind of stuff, but he hasn't done live stuff yet. So, we've gotta get him doing live stuff even though he's conditioning and all the other stuff. Until he's in there, I don't feel comfortable."

With 10 new players and Riley Welch and Brennan Canada -- both walks-ons -- serving as the only other two players who appeared in a game last season, Kentucky will likely trot out an entirely different team than a season ago this week.

Boston and Sarr earned identical honors from the league and the coaches. Boston, a freshman, was an All-SEC First Team pick and Sarr, a senior transfer from Wake Forest, was an All-SEC Second Team selection. Boston picked up votes for SEC Player of the Year in the media poll.

While noteworthy, preseason honors don't always tell the story of the season. Neither Immanuel Quickley nor Nick Richards were picked for the preseason media All-SEC teams or the coaches' All-SEC picks a season ago. Quickley played his way to the coaches' 2020 choice for SEC Player of the Year while making the media's All-SEC First Team, and Richards was an All-SEC First Team selection by both.

Kentucky has featured at least one player on one of the two end-of-the-season All-SEC teams (media or coaches) since 2006-07.