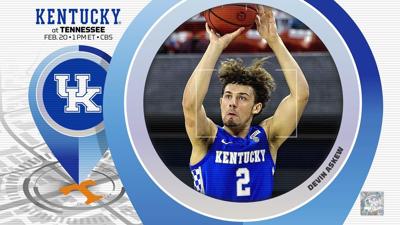 Having won two consecutive games, Kentucky will go for three in a row on Saturday, facing No. 19 Tennessee in Knoxville.

The Cats, who have been on the road since Sunday due to inclement weather in the region, have had a chance to bond, according to UK head coach John Calipari.

"I talked about that to the team when we left," Calipari said. "I told them about the NBA Bubble. Miami was in fifth place, and when I talk to anyone in the bubble, they said there were two teams that bonded unbelievably well. And the leadership on the team brought the team together. That was Miami and that was LA (Lakers). Look who was in the finals. So, I said, 'Use this time to be together.' But it's hard because being in rooms together and all that, you know, so you try to have spaces where they can go together. But yeah, we talked about it."

The bonding is one thing but Calipari knows there's another reason that his team is playing better of late.

Freshman forward Isaiah Jackson has been playing much better lately as well. Jackson had 18 points and 11 rebounds in the win over Auburn and had 15 points and nine rebounds, in just 20 minutes of action, against Vanderbilt. Jackson says he's feeling more comfortable on the court.

"I think just getting used to just playing to be honest," Jackson said. "I've started to get like a feel for the game, the college game. I'm just going out there and just hooping."

The Cats now turn their attention to the Vols, who won 82-71 in Rupp Arena two weeks ago. It was a game where Kentucky led by 10 points with 12 minutes to play, only to see Tennessee go on a 26-6 run to eventually win by double digits. Calipari knows how good the Vols are.

"Well, all they did when they got down 10 was spread the court and went on the bounce," Calipari said of the first contest between the teams. "So, it's a combination. The guy who is guarding the ball, you can't let him straight-line drive because we can't help you. We have to stay in front. You can't get bullied. The other guys are hopefully playing better team defense than we did at that point. But they're good."

Jackson hopes his interior presence will help keep the Tennessee guards out of the lane.

"Yeah, with my ability to block shots, I feel that I can do more this game, blocking shots and adjusting their shots, them coming in the paint," Jackson said. "I feel like I play a big role in this game, me and Olivier (Sarr) with trying to deflect shots and keep them out of the paint."

Calipari sees Saturday's game as a measuring stick for how far the Cats have come in the past two weeks.

"Tough game tomorrow afternoon," Calipari said. "But you know what? Let's go. Let's see where we are. Let's keep learning about each other. Let's see what we have to do to keep this climb going because that's what it is. It's about this climb."

It's a climb the Cats look to extend on Saturday at Thompson-Boling Arena.

Up Next: Another Showdown with the Volunteers

Up next for Kentucky is its longest-standing opponent in program history and its border-state rival, Tennessee. UK owns a 156-75 all-time record vs. the Volunteers, including a 56-52 mark in Knoxville.

During John Calipari's tenure, the Wildcats lead the series 13-9, but the Volunteers have a 6-3 clip over the last nine meetings. The teams split the matchups a season ago with both visiting teams earning the win. Tennessee earned an 82-71 win over the Wildcats in Rupp Arena just two weeks ago after the Cats earned a 10-point second-half advantage with 7:25 to play.

The Volunteers feature the third-best defense in the country, according to Ken Pomeroy's efficiency ratings.

Kentucky Holds Off Vanderbilt in Nashville

Kentucky head coach John Calipari is watching his young team grow before his very eyes. Another example of that growth came on Wednesday night in Nashville, Tennessee.

Kentucky built a 17-point lead in the first half, only to see Vanderbilt rally all the way back and tie the game early in the second half. But instead of letting the Commodores go ahead and take the lead, the Cats fought back and eventually won 82-78 at Memorial Gymnasium.

"Winning and playing like we did in the first half, where we should have been up 15, 16 and then they make a run and we don't fold, we don't fold," Calipari said. "We just keep fighting and we push it back to seven. That is big for this team. Big."

Calipari knew that Vanderbilt would make a run at his team. He just hoped the Cats would respond.

Davion Mintz had 18 points, Jacob Toppin scored 12 of his career-high 16 points in the second half on Wednesday. Isaiah Jackson had 15 points and nine rebounds, Brandon Boston Jr. added 12 points and three steals and Olivier Sarr had 10 points and four blocks for Kentucky (7-13, 6-7 SEC).

Toppin, who made some key plays down the stretch for the Cats, knows that the team has learned how to make plays late in games this season.

"We're still learning as a team," Toppin said. "I think we're getting better playing down the stretch. We still make a few mistakes that we need to fix. But with experience, we're going to fix them. And I believe in this team. I believe this team is going in the right direction. And we've just got to keep pushing."

Calipari knows that, on a given night, any player could be the one who steps up for this team. On this night, it was Toppin.

"Yeah, I was so happy (for Toppin)," Calipari said. "What I said to the team after – a real team, a team – really doesn't know who is going to have that big game. And whoever it is, everybody is ecstatic for. And they were ecstatic for him in that locker room. And that's what I'm saying, we're becoming a team. Instead of doing what I want to do, what does the team need me to do."

Calipari believes that this team is coming together at the right time.

"They're building their own confidence together," Calipari said. "They're finally becoming a team. And we're learning to be a better team."

Scotty Pippen Jr. scored six points and Dylan Disu added five in an 11-5 spurt that pulled Vanderbilt (6-11, 2-9) within a point with 26 seconds left but Toppin, Boston and Devin Askew combined to go 8 of 8 from the free-throw line from there.

Disu had career highs of 29 points and 16 rebounds for the Commodores and Pippen finished with 21 points.

Kentucky scored the first 10 points of the game and never trailed. Boston hit a 3-pointer and then took a steal coast-to-coast for a dunk 17 seconds later to spark a 15-3 run that made it 25-8 midway through the first half.

Issac McBride hit a 3-pointer to trim the Commodores' deficit to 12 at halftime and Vanderbilt scored 16 of the first 20 points of the second half to tie it at 46-all but Mintz answered with a 3-pointer and Kentucky led the rest of the way.

The Wildcats have won back-to-back games for just the second time this season. They won three in a row in early January. They have also scored 80 points or more in three straight games -- thanks to a combined 33 3-pointers over the last three -- after scoring 80 or more just once in the prior 17 games.

Long-time sportscaster Bill Raftery coined the phrase "onions" on Nov. 8, 1995 during a telecast of a New Jersey Nets game. The phrase is defined as, "A nice way of describing the toughness of a person."

This season, there's been one player in particular who has been called upon to take the tough shot in big situations.

Following yet another go-ahead 3-pointer in UK's latest victory over Vanderbilt, Mintz has now drained five important long-range shots this season for the Wildcats.

Mintz, the team's leading 3-point maker at 36 on the season, hit two crucial 3s at Vanderbilt during runs by the Commodores to try and get back into the game. The first came with 13:39 to play on the ensuing possession after Vanderbilt had knotted the score for the first time since 0-0 to give UK back a 3-point cushion. The Charlotte, North Carolina, native also hit one as the Commodores made it a one-possession game again with 1:41 to play.

Mintz also hit the go-ahead 3-pointer earlier in the week against Arkansas with 14 seconds to play before the Razorbacks were able to hit two free throws to win the game.

Mintz' run of big shots began when he hit a corner go-ahead 3 with 47 to play against the Vanderbilt at home as Kentucky held on to win and go 3-0 to begin Southeastern Conference action.

"It felt amazing," Mintz said after the Vanderbilt 3-pointer. "Coach is drawing it up and I knew where he had placed me. I knew that it would be open. Devin (Askew) put it right on the money and I was like, 'Oh yeah, this feels amazing,' especially right after I vividly remember missing one of my game-winning 3s at Creighton, just to hit one in that exact same spot, years later of course, that just felt amazing."