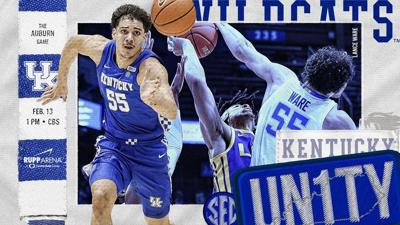 Kentucky and Auburn will meet for the second time this season, with the rematch slated for a 1 p.m. ET tip on Saturday at Rupp Arena.

The Cats and the Tigers met at Auburn Arena on Jan. 16, with Auburn pulling out a 66-59 win. Davion Mintzled Kentucky in scoring on that day with 11 points. Jacob Toppin had 10 points and six rebounds for the Cats, who trailed by just two with 1:40 to play, only to see Auburn close the game on a 6-1 run.

Allen Flannigan had 21 points to lead the Tigers, while Sharife Cooper had 11 points and eight assists.

On Tuesday, Kentucky came achingly close to winning, only to see victory snatched away from them again. Facing Arkansas, the Cats went ahead 80-79 on a three from Mintz with 14 seconds to play. But on its next possession, Arkansas' Jalen Tate grabbed an offensive rebound and was fouled while attempting a put back. Tate would make both free throws to give the Razorbacks an 81-80 lead with 4.3 seconds left.

Kentucky ran its length-of-the-floor inbounds play, getting the ball to Olivier Sarr at midcourt. But Sarr's pass attempt was stolen by Arkansas' Devonte Davis to seal the game.

Brandon Boston Jr. had one of his best games on the season on Tuesday. The team's leading scorer on the season, Boston hit six of 10 from the field, including four of five from behind the arc, on his way to 17 points. It was his fourth-highest scoring total of the season.

Sarr had his third double-double of the season on Tuesday. The senior hit four of nine from the field, including three of five from behind the arc, scoring 13 points while grabbing 10 rebounds.

The Wildcats have now lost four in a row and are 5-13 on the season. That includes a 4-7 mark in SEC play. Despite the losses, there's no quit in this team, according to freshman Devin Askew.

"As everyone knows, we're losing a lot of games right now but there's never a game when we don't go out there and fight," Askew said. "It's always a game where we're coming out with energy and a will to win. We want to win every game, don't get me wrong. Even though we're not, it's impressive to see all my teammates, including myself, come out there every game and still fight."

Auburn comes to Lexington hoping to pull off the series sweep of Kentucky, something the Tigers have never done. In fact, Auburn has only won two games against Kentucky in Lexington – in 1983 and 1988.

Davion Mintz and Olivier Sarr were both named candidates for the 2021 Senior CLASS Award. Eligible student-athletes must have notable achievements in four areas of excellence: community, classroom, character and competition.

Kentucky is one of two schools to have a pair of representatives with the other being Southeastern Conference foe Tennessee.

Thirty candidates have been selected for the award which focuses on the total student-athletes and encourages them to use their platform to make positive impacts as leaders in their communities.

The field will be narrowed down to 10 finalists in late February and those names will be placed on the official ballot for voting with the media, coaches and fans. The winner will be announced at the 2021 NCAA Final Four.

Mintz has appeared in 115 career games and made 93 starts. A contributor in all phases of the game during his career spent between Creighton and Kentucky, Mintz leads UK with 30 3-pointers this season, is averaging 9.9 points per game and has led UK in scoring a team-high-tying seven times. Mintz has scored in double figures in 35 career games and led his team in steals in more than 20. As a junior, he ranked second on the team with 40 steals, third with 60 free throws and fourth with 43 3-pointers. He poured in a career-high 21 point and made five 3-pointers against No. 21 Marquette. As a sophomore, he led the Big East and ranked 15th nationally in assist-to-turnover ratio and also led the Big East in assist-to-turnover ratio in league play only.

The Charlotte, North Carolina, native earned an undergraduate degree in marketing from Creighton University in May with a grade-point average of 3.02. He was also a 2017-18 Big East All-Academic Team selection. At Kentucky, he is pursuing a master's degree in kinesiology with an emphasis in sport leadership. As a high school student, he was recruited by a number of Ivy League schools where he earned honor-roll accolades and was a member of the Top 100 Young Black High School Students of Charlotte and a North Carolina Boys State Delegate.

During his undergraduate career at Creighton, the Bluejays participated in more than 70 hours of community service each year. Projects included everything from reading at local schools to visiting and befriending patients at the local children's hospital. Mintz also was a regular participant at the QLI developmental center. The center was specifically designed for people who were paralyzed or suffered significant injuries from incidents such as car accidents. Mintz points to time at the children's hospital and the developmental center as his favorite projects he's participated in during his time as a collegiate athlete. The COVID-19 pandemic has prevented this team from partaking in a number of traditional Kentucky community service projects, but Mintz and Sarr both participated in the annual Christmas drive where the team – with the support of John and Ellen Calipari and local businesses – selects 10-12 families to provide food, gifts, rent checks and other needs to identified families.

While at Creighton, Mintz also participated in a black student's bible study. The organization was school funded where minority students gathered weekly to share Bible verses and offer advice/support to fellow students. If basketball prevented him from attending in person, he often time FaceTimed or called in to continue to participate.

At Kentucky, Mintz and Sarr have played a leadership role for a UK team that featured 10 new players to the program, including seven freshmen, and are two of the team's captains. During the summer, the duo was two of the leaders who helped initiate a players-driven message regarding social injustices in the country. The initiative resulted in the players producing a public message brining attention to the cause, as well as internal conversations with teammates and the coaching staff about their own experiences.

Sarr has appeared in more than 100 career games with nearly 50 starts. As a Wildcat, Sarr has produced three double-doubles and is averaging 10.6 points and 5.8 rebounds per game. Prior to his season at Kentucky, Sarr was an All-Atlantic Coast Conference performer at Wake Forest. He was a third-team pick in 2019-20 and the runner-up for the league's Most Improved Player honor. The Bordeaux, France native was a two-time ACC Player of the Week selection and became just the 12th player in Wake Forest history to earn the award multiple times in a single season. He has topped double-figure scoring in more than 35 games and has logged 13 career double-doubles.

Sarr is pursuing a degree in communication and is on track to graduate in May 2021. He owns a 3.337 combined grade-point average between his time at Wake Forest and UK and was an All-ACC Academic Team honoree three times and has been a Dean's List member every semester.

At Wake Forest, Sarr engaged in nearly 100 hours of community service. Some of his favorite projects include: "Project Pumpkin," which was a Halloween-themed carnival for kids; "Hit the Bricks," a run to raise awareness and funds for cancer research; "Campus Kitchens," where he would deliver meals to needy neighborhoods; and his visits to the local children's hospital. The hospital visits are what he considers the most meaningful to him as he interacted with patients and families of children faced with life-threatening injuries and illnesses.

Sarr's post-graduate career aspirations include a professional basketball career, but he knows one day the ball will stop bouncing, and when that happens, he is inspired to give back to Senegal, his Dad's native country. Sarr spent most summers with family in Senegal as a youth. He aspires to build a school or provide aid to hospitals to better the life in a place that means so much to him.

Too Close to Call

One thing that has been consistent for Kentucky this season has been playing in close games. The Wildcats have been on the positive side of a few of them, but far too many times for their liking on the wrong side this season.

For just the second time in the program's storied history, UK has lost three one-point games this season following its latest down-to-the-wire 81-80 loss to Arkansas. The Wildcats also dropped three one-point heartbreakers during the 1957-58 season.

UK lost 65-62 to No. 7/5 Kansas but had a shot to tie with five seconds to play. The Wildcats overcame a nine-point second-half deficit to have the last-second chance to force overtime.

Against Notre Dame, the Wildcats erased a 22-point halftime deficit -- the largest for a home game in program history -- and had a shot to win the game with two seconds remaining but fell 64-63.

Kentucky overcame a late seven-point deficit at rival Louisville and had three possessions to tie or take the lead, including a shot with one second remaining to tie. Ultimately, the Wildcats fell 62-59 with a cruel in-and-out shot by Olivier Sarr to take the lead late in the game.

UK bounced back from those tough outings with a double-overtime win at Mississippi State and then stormed back from a nine-point hole against Vanderbilt and won with a Davion Mintz 3-pointer with less than a minute to play.

Kentucky suffered a 63-62 loss at Georgia on a last-second bucket by P.J. Horne as the Bulldogs erased a late six-point lead for the win.

The Wildcats erased a 13-point halftime deficit to pull to within a one-possession game in the second half at No. 18 Missouri multiple times before eventually falling 75-70.

Historically, the Wildcats have been decent in one-possession games under John Calipari. In fact, UK is 31-29 (51.7%) in Calipari's 12 seasons in games decided by three points or less (that includes the 1-5 mark this season). In games decided by just two possessions, or six points or fewer, Kentucky is 64-49 (56.6%) under Calipari.

Only the 2014-15 team -- who won its first 38 games -- finished the season with a perfect record in both forms of the down-to-the-wire games and the 2012 squad's only blemish was the infamous last-second 3-pointer at Indiana.

The 2013-14 team, which made a memorable run to the NCAA national championship, was 2-2 in three-point games and 2-7 in six-point games during the regular season before finishing 4-2 in one-possession games and 6-9 in a two-possession contests after the memorable postseason run.

UK is 5-1 under Calipari following a one-point loss, including 1-1 this season.