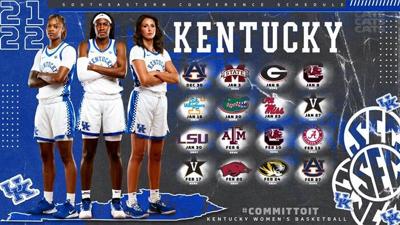 “We are very excited to announce our schedule for the upcoming season,” second year head coach Kyra Elzy said. “We have a solid slate in place that will challenge our team from start to finish. Hosting West Virginia and DePaul at home are two great non-conference games for our fans. Add in the always tough SEC schedule and it should make for a thrilling 2021-22 season. I’m proud of the hard work that our team has put in this summer. That strong work ethic has transitioned into preseason practice as well. I want our players to experience Big Blue Nation at its fullest. Season tickets are available and at a great price. Let’s pack Memorial and create a home court advantage unmatched in the nation.”

The 2021-22 season begins on Nov. 4 when the Wildcats play host to Lee University for an exhibition game inside Memorial Coliseum. Kentucky will officially start its season on Nov. 9 vs. Presbyterian at home and then host North Alabama two days later on Nov. 11. The lone road game of November will be at Indiana on Nov. 14 before concluding the month with home games vs. Winthrop on Nov. 21 and La Salle on Nov. 28. There is potential for one more November non-conference game to be added.

December starts with UK hosting West Virginia inside Memorial Coliseum on Dec. 1 as part of the SEC/Big 12 Challenge., UK will host Merrimack College on Dec. 5 before traveling downtown to host DePaul at Rupp Arena at Central Bank Center on Dec. 9. The Wildcats will travel to Louisville on Dec. 12 to play the in-state rival as part of ESPN’s Jimmy V Classic. UK ends its non-conference slate with home games vs. Morgan State on Dec. 17 and USC Upstate on Dec. 19.

The Southeastern Conference schedule will begin Dec. 30 when UK travels to face Auburn. The new year begins with a two-game home slate featuring a Jan. 3 showdown with Mississippi State and Jan. 6 battle with Georgia – both in Memorial Coliseum. Following a trip to South Carolina on Jan. 9 and a bye date the following Thursday, UK will play at Tennessee on Jan. 16. January ends with UK hosting Florida on Jan. 20 and Ole Miss at Rupp Arena on Jan. 23 before road trips to Vanderbilt on Jan. 27 and LSU on Jan. 30.

Kentucky begins February with back-to-back home games against the last two SEC regular-season champions, hosting Texas A&M on Feb. 6 and South Carolina on Feb. 10. After a brief road trip at Alabama on Feb. 13, UK hosts Vanderbilt on Feb. 17 and then hits the road for back-to-back games at Arkansas on Feb. 20 and Missouri on Feb. 24. UK concludes the regular season against Auburn at home on Feb. 27.

The regular season concludes with the 2022 SEC Women’s Basketball Tournament being held for the seventh time at Bridgestone Arena in Nashville. The tournament, which will include all 14 teams, begins on March 2 and concludes with the championship game on March 6.

The 2022 NCAA Women’s Basketball Tournament is set to start March 18-21 with the first and second rounds and conclude April 1 and 3 with the Final Four.

The women’s basketball television schedule will be announced at a later date, as will times for all conference and non-conference games.

Big Blue Madness Presented by Papa John's will serve as the annual start of the basketball season. The event will be held at Rupp Arena on Oct. 15 starting at 7 p.m. ET. Tickets to Big Blue Madness will be free again this year but there will be no in-person public distribution at Memorial Coliseum due to health and safety measures. Ticket distribution details will be announced later.

During the 2020-21 season, Kentucky defeated five ranked opponents, including back-to-back against top-15 teams for the first time since 2013. The two wins led Elzy to be named the espnW National Coach of the Week and the United States Basketball Writers Association tabbed UK its first-ever team of the week. UK was one of 10 teams in the nation to have four wins against top-25 NCAA NET teams entering the tournament.

The Wildcats will return a large chunk of their production from the 2020-21, including consensus first-team All-America honoree Rhyne Howard. Howard averaged 20.7 points per game last season, adding 7.3 rebounds per game and a team-best 91 assists. Kentucky's third, fourth and fifth-leading scorers also return in Dre'una Edwards, Robyn Benton and Blair Green. Point guard Jazmine Massengill, who missed the first half of the season due to NCAA transfer rules after finishing second on the team in assists per game. In all, UK returns 70 percent of its scoring, 3-pointers made and assists, while it brings back 64 percent of its rebounding and 60 percent of its steals.