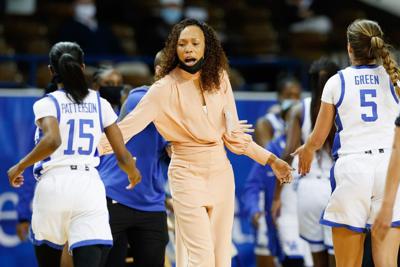 LEXINGTON, Ky. – The No. 12 University of Kentucky women's basketball team looks to get back to its winning ways Sunday as it plays host to Vanderbilt inside Memorial Coliseum for a 5 p.m. ET tip.

The game vs. Vanderbilt will be televised on SEC Network with Eric Frede and Christy Thomaskutty on the call. The action can also be seen through the WatchESPN app on computers, smartphones or tablets. Darren Headrick will have the call on the UK Sports Network on 630AM WLAP in Lexington. Live stats and free live audio will be available online at UKathletics.com.

With attendance limited to 15% of normal arena capacity, the majority of tickets have been sold as full-season packages for women's basketball. General public single-game tickets are available at Ticketmaster.com. Fans are encouraged to check Ticketmaster.com for any ticket allotments that are returned and released closer to game days, as well as for verified resale tickets. Concession stands are reopen at Memorial Coliseum. Doors will open 1 hour prior to tip.

Vanderbilt (4-3, 0-2 SEC) is coming off a home loss to No. 5 South Carolina, dropping to the Gamecocks on Thursday, January 14 in a 106-43 final score. Sophomore Koi Love flirted with a double-double in the game, earning a team-high 18 points and a team-high nine rebounds. Love has led the Commodores in scoring and rebounds all season, averaging a dangerous 19.1 points per game and 9.7 rebounds per game. Vanderbilt has five players averaging double figures in scoring this season, while the team is averaging 74.4 points per game.

Sunday's game will be the 56th all-time meeting between Kentucky and Vanderbilt in women's basketball with the Wildcats trailing in the series, 25-30. Kentucky leads the series in games played in Lexington, 13-11. Kentucky has won 13 of the last 17 meetings in the series against the Commodores. Only one of those losses during that stretch came in Lexington when VU took down UK 71-69 on Jan. 28, 2016. Last season, VU defeated UK 70-64 in the final regular season game of the year in Nashville.