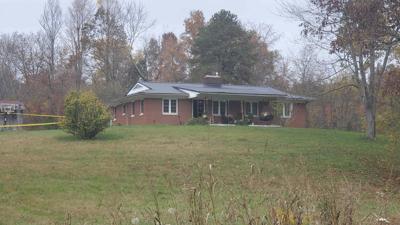 Laurel Sheriff's Detective Robert Reed along with Deputy Tommy Houston and Deputy Hobie Daugherty arrested Logan Baldwin age 24 of East Bernstadt early Sunday morning October 25, 2020 at approximately 8:03 AM. The arrest occurred following an investigation into an early morning shooting which occurred on KY 30 approximately 3 miles north of London at approx.3:36 A.M. which led to a male subject being shot at least once causing a fatal injury. Deputy Hobie Daugherty and Deputy Tommy Houston were the first two deputies on scene investigating an unknown problem there. The shooting was apparently the result of a domestic argument there between boyfriend/ girlfriend. The suspect fled the scene into Jackson County where information was developed by Jackson County authorities on her whereabouts. Jackson County Sheriff Paul Hayes took the suspect into custody on Moore Road in Jackson County  until Laurel County deputies Tommy Houston and Hobie Daugherty arrived there to return her to Laurel County. A 9 mm pistol was recovered in the suspect’s vehicle there. The victim is identified as: Don Roy Collett age 38 of East Bernstadt pronounced deceased at the scene by Laurel County Coroner Doug Bowling. Logan Baldwin was transported to the Laurel County Sheriff's office where she was interviewed and charged with murder by Laurel Sheriff's Detective Robert Reed. Baldwin was lodged in the Laurel County Correctional Center.