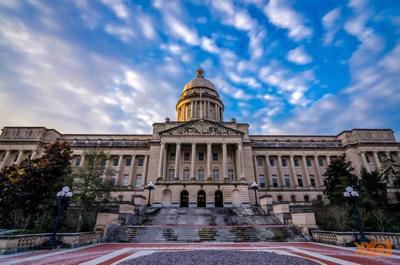 FRANKFORT -- Proposals concerning the wellbeing of children are often high-priority items in the General Assembly. Hundreds of measures aimed at improving the lives of young Kentuckians have come before lawmakers in recent years, including last year’s sweeping school safety legislation designed to make sure children are safe while learning.

This year alone, more than 50 bills – roughly 11 percent of all bills under consideration – have been introduced in the General Assembly to deal with matters concerning children. Several of those measures took steps forward this week.

Senate Bill 45 would support good nutrition and the healthy development of children by requiring the child care centers to follow food and nutrition standards set by the U.S. Department of Agriculture. These standards emphasize a variety of fruits and vegetables, whole grains, and limits on sugar. The legislation would also require child care centers to follow standards developed by the state on physical activity, sugary drinks, and screen time limits for children. The bill passed the Senate 34-0 on Monday and has been delivered to the House.

Senate Bill 42 would require school identification badges issued to students to include contact information for crisis hotlines specializing in domestic violence, sexual assault and suicide prevention. The measure would apply to public middle schools and high schools, as well as public or private postsecondary institutions. The bill passed the Senate 35-1 on Thursday and now goes to the House for consideration.

Legislation to prevent Kentucky school employees from paddling students or using other forms of corporal punishment was approved by House members on Friday. Lawmakers who spoke on House Bill 22 said corporal punishment lowers students’ trust in adults and sends the wrong message that physical aggression is a way to deal with problems. Other forms of discipline are more effective, they said. The bill passed the House 65-15 on Friday and now goes to the Senate.

Legislation that adds to last year’s school safety measure was also approved by the House on Friday. Senate Bill 8 would require school resource officers to be armed. It would also allow a school superintendent to appoint someone other than a district level school administrator to serve as a district’s school safety coordinator. The bill specifies the goal of having at least one school counselor or school-based mental health services provider for every 250 students. The bill passed the House on a 78-8 vote. Since the bill has already been passed by the Senate, it will soon be delivered to the governor’s office.

Some of the state’s youngest citizens could benefit from the advancement of Senate Bill 60, which would require that newborns be screened for spinal muscular atrophy. Early diagnosis of this genetic disease helps babies receive treatment when it’s most effective. The bill passed the Senate 34-0 and now awaits the House’s consideration.

In other business this week, bills on the following issues took steps forward:

Animal abuse. Senate Bill 21 would allow veterinarians to make a report to authorities if they find that an animal under their care has been abused. The bill was approved on Tuesday by the Senate Agriculture Committee and now goes to the full Senate.

Daylight saving time. House Concurrent Resolution 53 would allow Kentucky to permanently adopt daylight saving time, if Congress ever allows states to make such a move. The measure passed the House 92-2 and now goes to the Senate.

Expungement. House Bill 327 would require the automatic expungement of records in acquittals or cases in which criminal charges were dismissed. The bill passed the House Judiciary Committee on Wednesday and awaits consideration by the full House.

Sanctuary cities. Senate Bill 1 would call upon law enforcement officials and public agencies to use their best efforts, considering available resources, to support the enforcement of federal immigration law. It would also prohibit sanctuary policies in Kentucky or attempts to block officials from cooperating with federal efforts to enforce immigration laws. The measure passed the Senate 28-10 and has been sent to the House.

School principals. Senate Bill 7 would give superintendents final say over the hiring of school principals, in consultation with school-based decision making councils. The bill would also change the membership of the school-based councils by adding a parent member. The bill was approved by the Senate 20-15 on Thursday and has been sent to the House.

Kentuckians are encouraged to share feedback on the issues under consideration by calling the General Assembly’s toll-free message line at 1-800-372-7181.