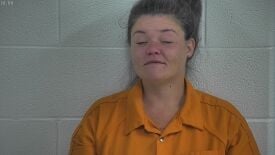 The arrest occurred off Pleasant view Road, approximately 6 miles west of London after deputies were dispatched to a possible intoxicated female subject passed out on a porch of a residence there.

Upon arrival at the scene deputies located the suspect and conducted an investigation determining that she was under the influence. Deputies noted they had been to that vicinity earlier on a similar complaint regarding a female subject knocking on the door of residences and refusing to leave.

Ashley Ann Lewis was charged with alcohol intoxication in a public place; disorderly conduct – second-degree. This individual was lodged in the Laurel County correctional center.