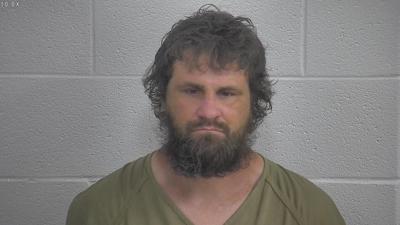 Laurel Sheriff's Lieut. Chris Edwards along with Sheriff John Root, and other Sheriff's deputies and detectives arrested Charles B. Smith age 38 of London on Monday afternoon May 3, 2021 at approximately 4:10 PM. The arrest occurred off Cane Creek Road, approximately 10 miles South of London after Sheriff's investigators located this individual who had phoned Laurel 911 center from his residence off Cane Creek Road, approx.. 10 miles southeast of London requesting an ambulance for his unresponsive wife and allegedly decided to transport her to meet the ambulance crew along the way due to living so far out in the County. Upon meeting the Laurel County Ambulance crew near Penny Lane on Ky 229 (approx.. 2 miles south of London), and upon EMS attempting to assist, this subject allegedly began screaming profanities at both ambulance crew members and threatened to kill them and to stab them. Then this subject allegedly pulled a knife and began to threaten to stab the ambulance crew stating they were not doing enough to assist her. EMS personnel radioed for law enforcement assistance at which time this individual threw the knife down and left the scene. When Sheriff's investigators arrived at the scene and conducted an investigation, they Subsequently located this individual back at his residence (approx.. 6 miles away) taking him into custody without incident. This individual was charged with two counts of wanton endangerment – first-degree; two counts of terroristic threatening – third-degree; two counts of assault – third-degree – EMS is victim. Sheriff's investigators assisting included: Laurel County Sheriff John Root, Maj. Chuck Johnson, Lieut. Chris Edwards who is the case officer, K-9/shift Sgt. Gary Mehler, Detective James Sizemore, Detective Taylor McDaniel, Detective Bryon Lawson, Detective Robert Reed, and Deputy Brent France.