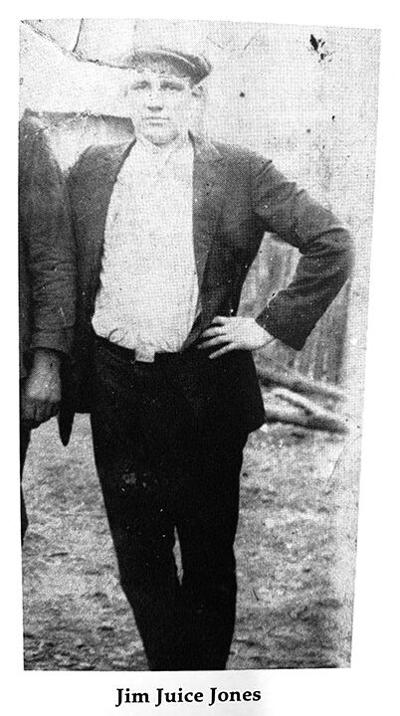 (Editor’s Note:  This article was taken from the book Pioneers of Beech Creek by Harold O. Goins.)

Jim “Juice” Jones was the most mechanically creative and innovative person to come from the Beech Creek/Harts Branch area.  His given name was James Jones, son of Charles Jones and Ellen Turner.

He created and developed numerous inventions including tools, appliances and chemicals for industrial as well as household uses.  Although Jim “Juice” was not formally educated in college, he possessed a unique mechanical and creative talent.

Jim designed and built a prototype of a wooden-spoked wheel for an automobile in the early 1920’s.  The idea was presented to Ford Motor Company who, at the time, did not show a high level of interest.

Three to four years later, however, the new model automobiles had the idea incorporated into its design.  Jim had not formally patented the idea and was certainly no match for a large automobile maker.

Consequently, he received no compensation or even recognition for his idea.

Jim designed and built a prototype of a fire and steampowered washing machine.  After a fire was built in the lower unit of the washer just above the floor, the heat would activate the steam lines and the agitator would wash the clothes. This was a very creative idea; however, the large companies who manufactured washers were about to introduce the first electrical washers and so Jim’s design did not pan out.

Jim’s most successful product was a liniment he developed for medical purposes for external use only.  He named it for his daughter “Betty Rose”.

This product has been used by local families for over sixty years.  Many older Clay Countians today recall their families using this product for decades.

Jim observed and studied law as a hobby.  He enjoyed putting it into practical use as well.  Whenever a friend, neighbor, or family member found theselves in a legal bind which might lead to a future courtroom situation, Jim would coach them as to how to respond and handle it.

He would conduct “mock” courtroom trials at home to help coach the person in court.  This person was almost always better off for having seen Jim first.

Jim was a self-taught and self-made man.  He stood out as being a very intelligent and clever individual who was the unspoken leader of the group.  Had Jim had the proper resources, a mentor and been formally educated, there is no doubt that he could have attained a high degree of success in the legal or engineering fields.