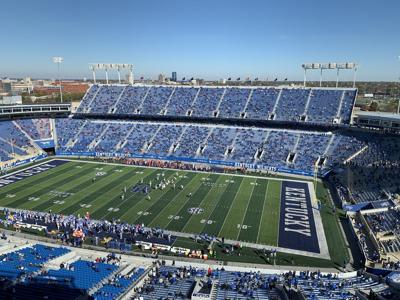 (LEXINGTON, Ky.) – Georgia fans love making the trip to Lexington. After all, what’s not to love? A winning trifecta at Keeneland followed by a predictable romp over the Wildcats are what perfect fall weekends are made of. Granted, Keeneland was shut down due to the pandemic, but after the Bulldogs (4-1) drove down the field with impunity on their opening possession, Dawg fans were giddy as usual—ready to make celebratory dinner plans.

Not so fast, my friends. Sometime during the week, Kentucky offensive coordinator Eddie Gran finally got the memo, started feeding the ball to Chris Rodriguez, and Kentucky (2-4)—with a couple of timely takeaways—hung tough before succumbing 14-3 to the heavily-favored Bulldogs.

Rodriguez, a 5’11” redshirt sophomore from McDonough, Georgia, plowed, pummeled, and bulldozed his way through the top-ranked Georgia defense for 108 yards on 20 carries. Most of his runs were punishing rushes, where he carried the would-be tacklers for several yards after contact, stubbornly refusing to be taken to the ground. All afternoon, he ran angry, enraged, and incensed—as if mad at his coaches for having to share the ball.

Considering the dud at Missouri, this performance was a good bounce back effort for Kentucky. But the Wildcats are well past the moral victory stage, so where do we go from here? In a year where a .500 season was regarded as the floor, now a break-even season is shaping up to be an unlikely possibility.

Difficult personnel decisions have to be made, and they all start with the quarterback position. Joey Gatewood, taking over for the injured Terry Wilson didn’t exactly set the world on fire in his Wildcat starting debut. The 6’5” transfer from Auburn completed 15-25 passes for only 91 yards without a touchdown. He also rushed 16 times for 23 yards but lost a brutal fumble as the Cats were driving for a critical come-from-behind score.

I’ve always been a Terry Wilson fan. The guy’s courageous, resilient, and has always been respectful in front of the media. He represents everything that’s good about all of college sports. On the field, it’s hard to discount what he’s accomplished for the program. He’s still 14-6 as a starter, including an unprecedented ten-win season and streak-busting wins against Florida and Tennessee.

We all know Mark Stoops is a loyalty kind of guy. He values relationships he’s built up with players he’s coached. With his offense obviously sputtering, however, he’s feeling the heat as the season unfolds.

“There’s always a balance there, and all coaches are looking for the right answer,” Stoops said when asked about his philosophy on who plays and who doesn’t. “I could tell you this, [with] all the decisions that go into it, we’re looking for whoever gives us the best chance to win the games.”

That sounds good on paper, but how does his loyalty towards experienced players affect his desire to build toward the future by playing younger guys with more upside potential?

“I would never sacrifice that for the future if I thought it could cost us the game,” Stoops continued. “I’m going to play the guys that give us the best opportunity to be successful. Again there is a balance there as well because to move the program forward, you’re trying to get guys reps, you’re trying to get them in there as much as you can, and they have to earn that trust throughout the week.”

It’s obvious Rodriguez needs to continue getting the ball more for Kentucky to be successful. He’s the future of the running game, and he gives the Wildcats their best chance to win. But it’s hard to leverage offensive success when you literally have no confidence in your passing game. Even with the Cats struggling from behind—but with still plenty of chances to win—not once did Gatewood take a shot down the field. With that being said, it’s time to hand the team back over to a healthy Terry Wilson. At least for the time being, he gives Kentucky their most experienced passer, and thus their best chance to win.

“We’re way beyond any moral wins or losses,” Stoops acknowledged.

Dr. John Huang is a columnist for Nolan Group Media. His new book, CUT TO THE CHASE, is now available on Amazon. If you enjoy his writing, you can follow him on Twitter @KYHuangs.