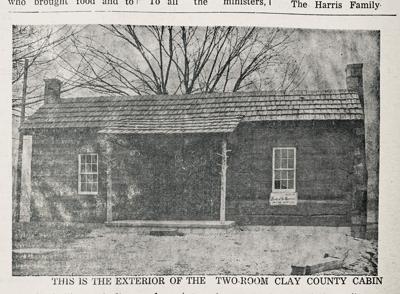 (Editor’s Note:  This story originally appeared in the May 5th, 1960 issue of The Manchester Enterprise.)

After years of trying, Thomas L. Britton finally raised enough money to erect a monument to the late James A. Burns once known to thousands as “Burns of the Mountains.”

The memorial is in the form of a two-room log cabin just across the road from Oneida Institute, which Burns founded 61 years ago in a remote Clay County area near the junction of Red Bird and Goose Creeks.

Britton, a former member of the Kentucky Legislature and one of Burns’ early students, raised the money little by little by obtaining modest donations from his friends and from people who had known and admired Burns.

The cabin, with a breezeway, or dog trot between the two rooms, isn’t merely a replica of an old-time mountain home.  It’s the real thing, although not standing on its original site.

Housing a collection of homely artifacts once in common use throughout Eastern Kentucky, are now seldom seen.  The cabin was originally a mountain feudist’s home.

Its square-hewn logs, which have been painted to preserve the wood, are said to be pitted with bullet holes.

The original cabin stood not far from Oneida, in the heart of the Howard-Baker feud county.

The old breezeway has been bounded up in the back.  Iron-barred gates protect it in front.  There’s a stone fireplace at each end of the house, one in each room.

Inside the rooms are ancient implements of primitive agriculture and county living as it was in that area not too many years ago.  And there’s a modest collection of Indian relics picked up in the neighborhood.

In the rustic museum are such things as an old “hawg” rifle, several ancient mauls, a hand cradle for harvesting wheat, which Burns erected with his own hands, several old broad aces, old kerosene lamps, an antique corded bed, a huge iron kettle for soap making and an iron wedge once used with the mauls for splitting logs.

There are old clocks, spurs and a side saddle such as women once used when they rode horseback.  There’s even the granddaddy of all typewriters.

Britton went to the one-room school on the site of the present institute, a Baptist high school for day and boarding pupils.  Later he taught under Burns for 11 years.

A one-time feudist, log raftsman and up-roaring lover of moonshine, Burns reformed and turned his energies toward educating mountain boys and girls and finally became a celebrated lecturer.  He died in 1945.

But Tom Britton was determined that people would never quite forget Burns of the Mountains, hence the museum.