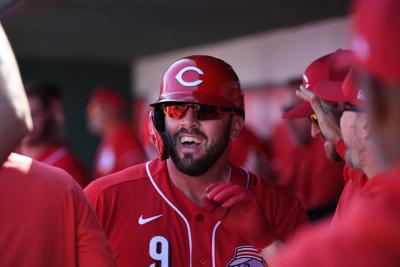 CINCINNATI -- When Mike Moustakas signed his four-year, $64 million contract with the Reds on Dec. 5 with the intention of moving from third base to second, there were skeptics about his defensive range and mobility in the middle of the infield.

Moustakas was a three-time All-Star third baseman who played at second in 47 games last season for the Brewers. During the 3 1/2-month shutdown due to the coronavirus pandemic, he stayed busy preparing himself.

“I didn't have access to weights as much as cardio equipment,” Moustakas explained. “I was riding the Peloton a lot, running around chasing three kids and swimming every day. I was eating really healthy. My wife was cooking a lot of healthy meals. It helped me out a lot.”

When he arrived at Spring Training, Moustakas had put on muscle weight from a heavy lifting program in the offseason. During the quarantine at his home in Southern California, he estimated that he lost 12-15 pounds.

“That was one of the benefits that I saw during quarantine was being able to hang out with my kids and get my body into better shape, I'd say, to play second base,” he said. “Being over there in the middle of the infield, I'm a little bit bigger of a guy, so any extra steps I can get, I feel, would be a huge advantage for me.

Strong defense would be a bonus, but the 31-year-old Moustakas was part of a $166 million offseason free-agent spree by a Cincinnati club looking to significantly upgrade its offense and run production.

“Obviously, offensively, he adds a lot to our lineup,” Reds manager David Bell said. “We saw last year, he’s maturing; he continues to mature as a hitter. He’s always had the power, but he continues to be a more patient hitter, have better at-bats. We really believe it’s going to continue to help him increase his on-base [percentage]. And we love him in our lineup, in this ballpark and on this team.”

The other expectation for Moustakas: his leadership skills and clubhouse presence. In a season that will be unlike any other, his positive influence could be a bigger bonus than originally envisioned.

“I can’t say I’m surprised, but man, what a pleasure to be around him,” Bell said. “Just a great attitude, a great teammate. He smiles a lot. He truly cares about his teammates. He has a voice, for sure. He’s not afraid to speak up or anything like that. But he also does a lot of his communication and leadership kind of behind the scenes, one-on-one and individually.

“He came into this camp in phenomenal shape, which is really going to help him at second base. Everything we’ve seen, we have no doubts that he can make the transition to be a second baseman every day.”

During batting practice each day, the left-handed-hitting Moustakas brought a routine he performed with the Royals and Brewers. He goes to the other side of the batter’s box and takes three right-handed swings. On a couple of occasions, he has hit those BP pitches over the fence in left field.

With Kansas City, Moustakas used to make bets with former bench coach Dale Sveum that he could hit homers right-handed. The bets would be made at each ballpark in the league. But it was not just goofing off. There’s a method behind the practice.

“I used to switch-hit as a kid, and my dad always told me not to stop switch-hitting and I didn't listen to him, which I wish I would have now.”

Moustakas is excited for the abbreviated 2020 season that will begin for the Reds on July 24 vs. the Tigers. As someone with postseason experience, including a World Series title with the Royals in ‘15, he knows what it will take.

“I think as long as we're able to realize that getting a guy over from second to third or getting a guy in and having a two- or three-run lead or saving the bullpen … the team that can do that the best is going to have the best chance at winning this thing,” Moustakas said. “It's just going to be everybody buying in that those numbers up on the scoreboard aren't going to matter that much this year. What's going to matter is that win-loss total and going out there and finding ways to win ballgames.”

Bell County School Board will have special called meeting Monday