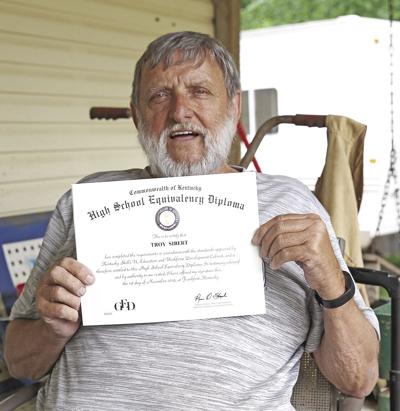 Those are the words of 73-year-old Troy Sibert on how he felt receiving his GED diploma while wearing his cap and gown during a ceremony at Eastern Kentucky University.

Over the last year Sibert attended class at EKU to obtain his GED.

A lot had changed since Sibert dropped out of Clay County High School as a junior in the early 1960’s.

When asked what made him drop out, he had a simple answer.

“My friends and I were all playing hooky a whole lot,” he said with a laugh.  “They all quit so I kind of just followed suit.”

Like many, Sibert started working in the coal mines to make a living and soon started a family.

“Back in those days an employer didn’t ask for a high school diploma,” he said.  “You didn’t have to have it to get a good job.”

For the majority of his life, Sibert said he hadn’t really thought about finishing high school.

“You just get caught up in trying to survive and make a living,” he said.

It’s not every day a person Sibert’s age seeks to obtain their GED, but he says it’s something his daughters encouraged him to do.

“I wouldn’t have done this if it hadn’t been for them (Tonya Revis and Kisha Hoskins),” he said.  “They really pushed me.”

Sibert’s daughter Tonya Revis, said when she obtained her bachelor’s degree her dad said he’d wished he would have finished high school.

“He would always tell us (my sister and I) how proud he was of us,” she said. “I would tell dad to go back to school because it’s never too late!  We were constantly telling him that age is just a number and to keep on keeping on.”

Both daughter’s described Troy as ‘hard-working’ with a very strong ‘work-ethic’.

“He’s always been strong-willed, a hard worker and never seen his age as an obstacle,” Kisha Hoskins said.

Sibert says he wasn’t too apprehensive when he signed up to obtain his GED.

“I was always pretty good in math and at my age I figured I had nothing to lose by trying,” he said.

His primary instructor at E.K.U. was Rodney Lipps.

“Troy is one of my favorite students I’ve had the privilege to work with in my 18 years of doing adult education,” Lipps said.  “Troy, like most of our students, was a little nervous at first, but I could see him gain confidence each night he came to class.  Troy would come to class for a couple of hours and then he told me he would often go straight from there to get more tutoring.”

“I’ve found it’s often very rewarding to work with older students like Troy because they seem to really appreciate the opportunity in front of them and they tend to be motivated once they make that initial step to get started,” he said.

The satisfaction of seeing a student complete the course and graduate makes all the hard work worthwhile for the student and the staff, according to Lipps.

“I might have been listed as his primary instructor, but as with all our students, it was a total team effort between all our staff to help them from enrollment to graduation,” he said.  “We all think the world of Troy and we were so proud as we watched him walk across the stage to get his diploma.”

Both daughters, Tonya and Keisha, said it was one of the proudest moments in their lives to see their dad graduate.

“I teared up when I saw him standing there in his cap and gown receiving his diploma,” Tonya said.

“Seeing him standing there in his cap and gown was a very proud moment for all of us,” she said.  His willingness proved that you can do anything, you just have to set your mind to it and follow through with it.  We couldn’t be prouder of him.”

One might think receiving his GED would be enough for Sibert, but he says it’s probably not.

“I’m looking at taking some college courses,” he said.  “I’m not sure what I will take until I see what all they offer.”

“Don’t live the majority of your life wondering ‘what if’ when it comes to completing your high school education,” Troy said.  “I wish I’d have done this earlier, but it’s never too late!”