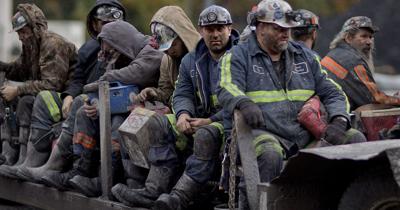 For the last two weeks statewide media has reported the situation with the Blackjewel miners in Harlan County and all the help they’re receiving from the public.  The Enterprise has learned, that help has been exclusive to the county’s the miners reside in which left eight Clay County men employed by the company empty handed.

Anna Hubbard, Monica Davis and Revelle Berry, wives of three Blackjewel miners, say they’re families have been left out because they don’t live in Harlan County.

“Most people in our community and other counties are under the impression that all of the Blackjewel employees have received help,” Davis said.  “These guys haven’t received anything, neither were they eligible for the Gilliam Foundation funding, because they don’t live in the areas where the funding was available.”

The Richard and Leslie Gilliam Foundation donated over $1 million to give 508 Blackjewel miners in immediate need of $2,000 each.  Checks were presented to community assistance groups in Harlan and Letcher counties in Kentucky and Wise County, Virginia.

That left out over 70 employees from Leslie County, seven from Clay County and two from Laurel County, according to Berry.

“Many of these families, including my own, are struggling,” Berry, whose husband Clifford worked for Blackjewel mining.  “The Harlan County Judge-Executive (Dan Mosley) told our guys that if their own county wasn’t doing anything for them they just needed to move to Harlan.”

Berry says they’ve reached out to State Representative Derrick Lewis and he is trying to submit names of miners in Clay, Leslie and Laurel for assistance from the Gilliam Foundation for financial assistance.

On July 1, approximately 1,700 employees of Blackjewel went without work after the company filed Chapter 11 bankruptcy.  The shutdown included operations in Kentucky, West Virginia, Virginia and Wyoming.  The last check received by the miners came on June 28thbut five days later the banks withdrew the deposit as the checks bounced leaving many without money.

“It has been eight weeks since any of us have received a paycheck,” Clifford Berry said. “It’s put us all in a hardship.”

When the miners filed for unemployment benefits they also received more bad news.

“It was discovered that Blackjewel had not paid the required unemployment benefits for the last two quarters,” Clifford Berry said.  “This caused us to only be eligible for a fraction of the eligible benefits.”

When these men attended information meetings in Harlan and Leslie counties they were told to return to their own county for assistance.

“Clay County needs to be made aware of the situation facing these miners,” Berry said.  “We are in need as much as miners in those other counties.”

On Saturday, August 17that 8 a.m. a walk will be held in Manchester to raise money for the Blackjewel Miners of Clay County.  The walk will begin at Manchester’s Eastern Kentucky University Campus and end at the middle school.

All donations will be accepted to help these miners and their families in their time of need.

You can also make a donation on Facebook at Clay County Blackjewel Miner Relief Fund, according to Monica Davis.