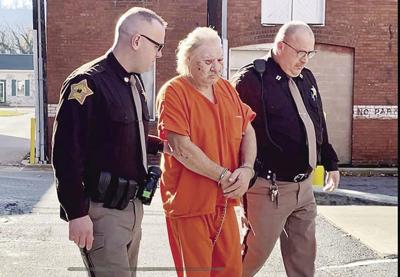 A Kentucky man is being held on a $1 million bond and facing charges that include attempted murder of an Indiana State Police officer, aggravated battery and criminal recklessness in connection with an early morning standoff and active shooter call Saturday at an eastern Jefferson County home.

Wade Ross Roark, 59, of Manchester, Kentucky, fired upon and struck ISP Master Trooper Joseph Livers, a SWAT Team member from Batesville, in the legs near the end of a five-hour standoff with police at the home of his brother-in-law, Garry Arig, 8273 E. S.R. 56, Madison, and Alig’s family just east of Splinters Ridge Road near Brooksburg.

Police responded to the home shortly after 2 a.m. Saturday after Jefferson County Central Dispatch received a 9-1-1 call that other family members were holed up in a locked upstairs bedroom for their safety and Roark was in the basement shooting a handgun up into the basement ceiling and the first floor.

Roark appeared for an initial hearing before Jefferson County Circuit Judge D.J. Mote Monday with the judge reading the charges, explaining the penalties Roark might face if convicted, and appointing a public defender to represent Roark in the case. Roark told Mote he was living on disability and had been unemployed “since the ’90s.”

Roark had been held in the Jefferson County Jail on a $1 million cash bond since his arrest Saturday and Mote extended that bond while entering a “not guilty” plea on Roark’s behalf. He set a pretrial date for 1 p.m. Feb. 5, 2020, and a jury trial date for 9 a.m. Feb. 25, 2020.

Roark appeared in court in an orange jail jumpsuit with his hands in cuffs and legs in shackles. His face was puffy and appeared bruised around his eyes. When asked to respond to the judge’s questions, Roark seemed to want to explain the attempted murder charge only to be cut off by Mote, who reminded Roark there was time for that later and that Monday’s hearing was to make sure he understood the charges that had been filed.

While being escorted from the courtroom after the hearing, Roark lifted his hands as far as his handcuffs would allow and waved to a couple seated in the courtroom. The woman said she was Roark’s daughter, Luann Rodriguez, who had made the 180-mile trip from her home in Manchester, Kentucky, to attend the hearing.

Roark’s daughter said her father had suffered a mental breakdown about two years earlier and had been diagnosed as psychotic but she had no explanation for his actions Saturday. She said she has not spoken with her father since the incident.

A probable cause affidavit prepared by Indiana State Police Det. Brent Miller said Roark’s brother-in-law, Garry Alig, who owns the property where the shooting occurred, told police Roark had been staying intermittently in a camper on the property and not in the residence where the incident took place.

Alig told police he was awakened early Saturday morning to a sound he thought was a gunshot. He went from his second floor bedroom to the first floor where a juvenile in the home told him the sound was Roark firing a gun in the basement. Alig went back upstairs and called 9-1-1 after Roark continued to discharge the firearm. Alig said he was “afraid to move family members down the stairs and outside the residence because he feared that Roark would hear their footsteps and shoot them through the first level floor.” He told police Roark was known to carry a Rossi 9mm handgun and had used illicit drugs in the past although he was “unaware of any recent drug use.”

The first officers responding to the call could hear rounds being fired in the basement. Madison Police Officer Brian Ashcraft made contact with the occupants upstairs, telling them to move to a bedroom door that had access to the exterior of the house. He then kicked in a door allowing a man, woman and three children to exit the residence.

After being told Roark was the shooter, Ashcraft made verbal contact and ordered Roark to exit the house on multiple occasions but Roark refused commands. Officers attempted to make visual contact by shining a flashlight through a basement window and Roark shined a light back at them.

Eventually, Roark told Ashcraft that he would like to speak to his ex-girlfriend Brenda but was unable to provide additional information other than the first name. The affidavit filed with the case said that during the conversation, Roark told Ashcraft that he was “going to kill a male subject identified as ‘Chris,’ as well as unspecified Hispanic men.” Roark said he would not shoot the police, but indicated he was “going to shoot Chris and the Hispanic men.”

Once Indiana State Police arrived, further communication was established with Roark and during the discussions, the affidavit said, Roark said the “DEA and the Mexican drug cartel were after him” and that he could hear people on the floor above him and had discharged his firearm numerous times into the ceiling and floor above him. Roark also told police he had been “awake for four days.”

The affidavit said officers recognized that with such lack of sleep they might be dealing with a situation consistent with excessive use of methamphetamine.

With the standoff continuing, the Indiana State Police Emergency Response Team was dispatched to the scene. Officers from the Indiana State Police-South Zone SWAT Team assembled outside the residence and determined that Roark was in an area of the basement comprised of stone-type material with an open area in the wall that allowed him visual access.

Shortly after daybreak, with SWAT officers positioned outside the home, Roark fired through the open area at Trooper Livers, striking him in the calf area of the left leg with the bullet lodging in his right knee. State Police returned fire and shortly thereafter Roark surrendered to police and was taken to jail.

Livers, an 18-year ISP veteran, was taken to King’s daughters’ Hospital in Madison where the attending physician indicated the path the bullet traveled was “extremely close to a major artery” in Livers’ left leg. The officer was taken to University of Cincinnati Hospital for further treatment and surgical removal of the bullet.

State Police Sgt. Stephen Wheeles, public information officer for the Versailles Post, said Livers will likely require “significant recovery time” from the wound. He said he did not know if Roark also sustained injuries in the incident but that they would have had to have been minor since he was in jail and not a hospital.

State police continued to investigate the incident throughout Saturday afternoon and eventually determined that there were six occupants other than Roark in the house — including three juveniles — when Roark started firing rounds.

Police who interviewed Roark at the Jefferson County Sheriff’s Department, described him as “lucid” and speaking “with clarity about the incident.”

Roark acknowledged that he knew there were other people in the residence when he first started firing bullets into the dwelling portion of the home — including two adults and three children — and he told police he heard footsteps above him and fired multiple shots through the first floor.

State Road 56 was closed to traffic for about 14 hours during the standoff and the investigation before re-opening shortly after 5 p.m. Troopers and other law enforcement continued to come and go throughout the morning and afternoon as more than two dozens official vehicles, including a SWAT truck, lined the roadway near the property east of Brooksburg and across S.R. 56 from the Hi-Acres Campground and bordering the Splinter Ridge Fish & Wildlife Area and Morris Chapel Cemetery.