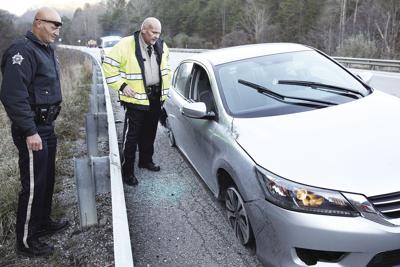 Almost a year to the day of an accident that claimed the life of a Lancaster woman, an eerily similar scenario occurred Thursday on the Hal Rogers Parkway.

Near disaster was diverted as a 911 call was made reporting a car was travelling on two rims on the Hal Rogers Parkway around 7:15 a.m.

Units with the Clay County Sheriff’s Department and Manchester City Police found a silver car with flats on the passenger side.

They found the vehicle near the 16-mile-marker and was able to get it to stop, according to sheriff’s department public affairs officer Trent Baker.

They approached the vehicle to find an elderly woman behind the wheel of the vehicle that had no rubber on either rim on the passenger side.  They attempted to talk to the woman, but she would not respond, only staring straight ahead.

After numerous attempts to no avail, they attempted to open the doors but found they were locked.

Deputies were forced to break out a side window of the car to offer the woman aid.

The woman was very disoriented and had no idea where she was at.  Upon a search of her purse, they found her identification.

Family members say Peters has severe mental issues and they had no idea she had left home.

According to Google Maps, Toledo, Ohio is at the most northern point of the state at Lake Erie.  The trip from Toledo to Manchester is 403 miles and estimated at seven hours and six minutes.

Mrs. Peters was taken to AdventHealth for treatment and family members came to Manchester to return her home.

On November 20th, 2019, Karen Arnold, 62, of Lancaster, left her home to go to Wal-Mart.  Later that afternoon rescue workers removed Mrs. Arnold from a one-vehicle accident on Ky. 80 where she crashed her car into Horse Creek.

Arnold later died from injuries she received that same day.

Like the Peters family, Arnold’s family said they had no idea why she was in Manchester and they had no connection to Clay County.  Lancaster is 69 miles from Manchester.

Sheriff Patrick Robinson said he’s seen a lot in his years of law enforcement but nothing as similar as this.

“To have two women, disoriented with no connections to Clay, arrive nearly a year apart to the day in our town is unimaginable,” he said.  “I’m thankful our officers were able to see today’s situation end with no injuries or loss of life.”