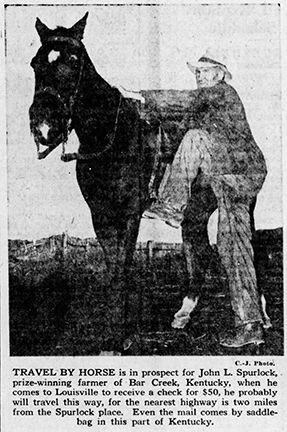 (Editor’s Note: This article by Jack Bunker originally appeared in the December 11, 1941 edition of the Louisville Courier-Journal.)

It was no easy job telling John L. Spurlock that he was a district $50 prize winner in the 1941 Home and Farm Improvement Campaign of the Courier-Journal and Louisville Times.  It meat riding horses across a swollen Goose Creek, up the right fork of Laurel Creek, with the mounts slipping and sliding on the wet rock, and then down a mountain road to the edge of Red Bird River, into a country so secluded by the steep hills of Clay County that it seemed like a world apart.

But his distance from the highway and things urban hasn’t prevented John Spurlock from doing a fine job of farming along the Red Bird River.  From the proceeds of his 90 acres, which are partly in wooded hills, he has managed to educate his fourteen children.  Almost without mentioning Mr. Spurlock’s other achievements on the farm during 1941, it is enough to say that he made enough money “to help keep five of the kids in college.”  Seven others are in grades and in high school.  There being no high school within miles they have to attend boarding school.

The Spurlock’s moved on their present farm when they first “set out” as a young married couple and, bit by bit, they have added to their land, enlarged their home and educated their family.

How they have done so well is a record of smart farming and good management with a complete program of living at home.  They butcher their own meat, trade corn for flour, and during 1941, for instance, they canned 1,000 quarts of vegetables and fruit.

As Mr. Spurlock says, “A fellow has to shift right hard to raise a family in this country.”

All that they have accomplished has come entirely from the sale of tobacco, hay, potatoes, hogs, cattle, chicken and eggs.  Mr. Spurlock has only a 1.2 acre tobacco base, but managed, by using his bottom land, to get a yield this year of 2,000lbs.

Probably no other farmer in the contest has demonstrated so much ingenuity in soil improvement.  When his money runs out and he can’t buy more fertilizer, Mr. Spurlock makes up the difference with rotted chips, cinders sediment from the yearly overflow of Red Bird river.

This prize-winning farmer’s reason for success is succinct and crisp with mountain logic.  He says “we succeeded here because we never had money to move away.  We just had to sit down here and make good.”