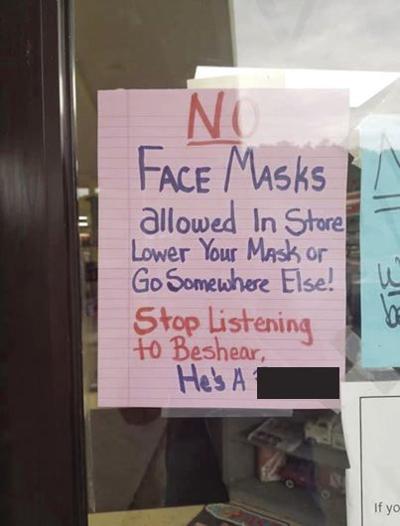 A local store has made national news after posting a sign in their door saying, “No face masks allowed.”

The sign says, “No face masks allowed in store lower your mask or go somewhere else! Stop listening to Beshear, he’s a dumb(expletive).”

Marisa Stavely, owner of Alvin’s, says she would never deny anyone with a mask on or without a mask inside their store.

“My employees and I wear a mask, and we take this virus very serious,” she said.

Stavely says the issue about a mask is not really about a mask, it’s more about government control.

“My point with the sign and I added another sign today with that one, is don’t allow the government to tell us what to do,” she said.  “If you want to wear a mask then do so, if you don’t then don’t, it’s our choice. For the last two going on three months, we have been repeatedly been told what we can do or what we cannot do, while not everyone is on the same level playing field, as so many businesses deemed non-essential have been closed by our governor, yet Walmart and all the big box stores are allowed to line up, shoulder to shoulder. Walmart sells clothes, clothing stores are shutdown, you can still buy electronics, but electronic stores are shutdown, there are parts of Walmart that are non-essential but are allowed to be open. So why were the small businesses not given the same choice to remain open and proactive the CDC guidelines as the big box stores and would have much greater success maintaining the CDC guidelines. Our town, like so many, are thrived on small business owners. I’m not saying don’t take this virus serious, we do our part to keep our customers safe, and will continue to do so. We will leave it up to our customers, as to whether they want to wear a mask or not, it’s their choice.”

The store has taken steps in the past with COVID-19 safety precautions, according to Stavely.

The public’s reaction seems to be split on the viral post.  Many sounded off upset about the letter while just as many say they support the stance the store is taking.

“Marisa Stavely has the right to do whatever she pleases with her own store,” said Amber Ruth Nicole Barefoot on Facebook.  “Y’all act so upset over a mask, but I didn’t see y’all wearing any before he (Gov.) tried forcing it so why whine now?”

Kameron Dople says she felt the move was irresponsible.

“It would not hurt them in NO WAY to let a person wear their mask,” she said.  “Some people have orders from their Dr. to wear their mask due to other reasons.”