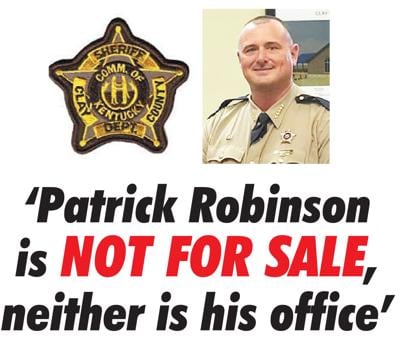 “I’ve got more problems to deal with than two roosters fighting.”  Those were the words of sheriff Patrick Robinson after he and his department came under fire from a liberal animal rights activist group.

Showing Animals Respect and Kindness or SHARK, based in the Chicago area, is a liberal activist group claiming to fight for animal rights.  The group recently attended a cock fight at the Laurel Creek Game Club, off Ky. 11, and videoed sheriff’s deputies at the cock fight and is upset nobody was charged with animal cruelty.

The group’s video and unfounded allegations may lead to legal action being brought upon by the sheriff’s department.

The sheriff says his officers mistakenly thought that cockfighting is legal.

“Depending who you speak with, some legal experts feel cockfighting is legal and some illegal,” the sheriff said.  “I think the group (SHARK) should give evidence to local prosecutors if it wants to pursue charges.”

Cockfighting is a Class A misdemeanor in Kentucky and punishable by up to a year in jail.

Members of SHARK entered the Laurel Creek Game Club in June with hidden cameras and filmed cockfighting.  They called to report the incident several times in effort to get law enforcement to respond.

Deputies with the sheriff’s department went to the game club to investigate what they thought was a disturbance.  Officers spoke with people at the club and left after seeing no disturbance.

Cockfighting is listed as a misdemeanor crime in the state of Kentucky, which draws the ire of SHARK President Steve Hindi.  Hindi called cockfighters “degenerate” and “psychopathic”.

The group also posted a derogatory video about the Clay County Sheriff’s Department with Hindi making several potentially libelous statements toward the sheriff and deputies.

The sheriff said his department is not protecting the game club like Hindi accuses and the allegations of corruption is a lie.

“Patrick Robinson is not for sale and neither is his office,” the sheriff said.

Robinson said he is exploring a potential defamation complaint.  He said SHARK is hyping the incident to seek financial gain and support.

In 1974 the state legislature approved a law that brought cockfighting under the definition of second-degree animal cruelty, according to the state Court of Appeals decision published in the Lexington Herald-Leader.  The newspaper says in 1980, the legislature approved a measure excluding birds from that law, which would have made cockfighting legal.

John Y. Brown, governor of Kentucky in 1980, vetoed the measure, but attorneys representing cockfighters have argued in several cases that Brown delivered the veto after the deadline, meaning the law stood and cockfighting was not illegal.

Since then, the Court of Appeals has upheld the veto, in numerous cases of cockfighting.

Most everyone admits the language in the law is confusing and it would be good to make it clearer, according to Todd Blevins, the state director of the Humane Society.

What would happen IF a law enforcement agency conducted a raid on a cockfight?  Legal experts tell The Enterprisethat the roosters would have to be taken in as evidence and cared for until the case is finalized.

Sources involved in cockfighting told The Enterprise as many as 300 roosters are present at some fights.

When The Enterprise told the sheriff this information, he said his department would have no way to hold the roosters for any period of time.

“We don’t have any way of taking in 300 roosters and care for them daily until a case is resolved,” Robinson said.  “This would be a huge burden upon the taxpayers for a Class A misdemeanor.”

Once the case was resolved and if a conviction was had, The Enterprise was told the department would either have to find an agency to take the roosters off their hands or they’d have to be euthanized.