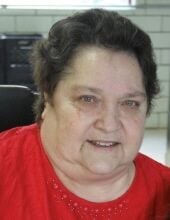 Phyllis was born in Clay County, KY on September 4, 1945, a daughter of the late Juleda (Webb) and Jesse Reed.

She is preceded in death by her husband, William "Bill, Jr." Hensley, Jr.

Phyllis is survived by her two daughters: Wilma Faye Grubbs and husband Clifford, and Paula Sue Morgan and husband Darryl, all of Oneida.

In addition to her husband and parents, Phyllis was preceded in death by her sisters: Cecile Hensley, Betty Stidham, Joyce Gibson, Imogene Hacker, and Sadie Hyden.

Services were held on Saturday, September 12th at Britton Funeral Home in Manchester, KY, with Todd Hicks officiating. Burial will follow in the Irvin Hill Cemetery at Oneida.

Britton Funeral Home was in charge of the arrangements.

To send flowers to the family of Phyllis Hensley, please visit Tribute Store.
We need your support