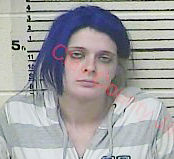 Clay County Sheriff Patrick Robinson is reporting that on January 9, 2020 at approximately 4:00 Am Clay County Sheriff Deputy Wes Brumley arrested Stephen Baird, 26 of Paw Paw Road and Martha Morris, 25 of Crawfish Road. The arrest occurred when Deputy Brumley attempted to conduct a traffic stop on a vehicle on Highway 80 when the driver of the vehicle accelerated with intent to evade Deputy Brumley. The driver of the vehicle finally came to a stop after a brief pursuit. During the investigation Deputy Brumley determined that the subject was under the influence. After running the information of the female passenger it was discovered that she had numerous active warrants for her arrest. Assisting with the pursuit and arrest was Manchester City Police Sgt. Jeff Couch and Manchester City Police K9 Officer Ryan Jackson.