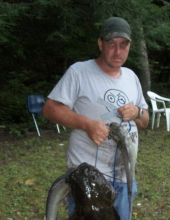 Randy was born in Beverly, KY on April 5, 1969, a son of Pauline (Jackson) and Clifford Wayne Gray, both of Brightshade.

Randy is survived by his wife Lori (Woods) Gray, and his daughter, Whitley Gray, both of Booneville; and by his sister, Lisa Gray Jackson, and brother, Johnny Gray, both of Brightshade.

He is also survived by his father-in-law and mother-in-law, Bob and Lucy Woods; brother-in-law, Robbie Woods and wife Wanda Gail; the following nieces and nephews: Krysten Woods, Brandon Chester, Eric Jackson, and Ryan Jackson; and by his special canine friend, Charlie Boy.

Randy is preceded in death by his grandparents, Clark and Cleo Jackson, and by his nephew, Dustin Blake Jackson.

Services were held on Thursday, November 19th at Britton Funeral Home in Manchester, KY, with Barry Hubbard officiating. Burial will follow in the Brandenburg Cemetery in Booneville, KY.

To send flowers to the family of Randy Gray, please visit Tribute Store.
We need your support