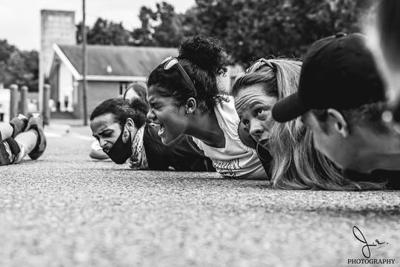 (Editor's Note: Reporter Chris Kenning gives an interesting insight into the support protests are getting in rural Kentucky areas.  This article is from Mr. Kenning and the Louisville Courier-Journal.)

Hope Davis knew it was a longshot: Organizing a Black Lives Matter protest in Benton, Kentucky, a town of about 4,500 that is 97% white, where Confederate flags at times are still popular.

“It might just be us and a couple of friends,” she told her husband, who is black, on a recent Wednesday, a fear that seemed all too real after she received threatening social media messages.

“It was the most beautiful thing I’ve ever seen, especially for our county,” she said. “There has never been a civil rights protest here. This was the first one. Ever.”

While attention focused on protests and police clashes in the commonwealth's largest cities, dozens of demonstrations have popped up in rural, largely white towns across Kentucky, underscoring the protests' remarkable resonance.

As of Tuesday, more than 970 protests had taken place in about 400 cities and towns across the country, according to research conducted by the marketing firm Ipsos and teams from the Universities of Chicago and Oxford.

It's particularly notable in deep-red pockets of Kentucky, known as an arch-conservative state, and echoes the trend in small towns across West Virginia, Ohio, Oregon, Illinois, Tennessee and Arkansas, academics said.

Hope and Dwaylon Davis, pictured with their children, helped organize a protest over racism and policing in Benton, Ky., part of a series that popped up in rural Kentucky towns. (Photo: Courtesy of Hope Davis)

“I’ve been amazed to see protests spring up in small towns … and a lot that have few African Americans in them, especially in Kentucky,” said Dewey Clayton, a University of Louisville political professor. “It says to me, something is different this time.”

“It seems like there’s a broader willingness for people to do more,” he said, with more realizing that “they’re going to have to do more than just say, I’m personally not racist.”

Protests are 'a pretty moving experience'

From Beaver Dam to Paintsville, residents in rural Kentucky turned out on street corners and town squares, from the handfuls to the hundreds, to publicly join the call to end unequal policing and systemic racism far from liberal, urban cities.

In the Eastern Kentucky city of Corbin, crowds recently marched against police violence and racism. For some, it was all the more poignant in a place that nearly a century ago forced black residents out of town at gunpoint.

In Hazard and Harlan, residents cited a history of coal miner battles for economic justice in coal. Hindman teacher Jordan Pack said he came out because of the “bam, bam, bam” of repeated incidents of deadly police violence.

“It’s opening people’s eyes,” he said, calling his own first-ever participation in a protest in Appalachian Kentucky "a pretty moving experience."

Steven Beda, who studies rural protest movements at the University of Oregon, said the spread to towns also in some cases helped show that not all who live in rural areas are as politically conservative as are often portrayed.

“We’re told to blame black folks, immigrants and people of color for our suffering, keeping us fighting each other instead of rich folks, corrupt politicians and big business,” she wrote in a recent post.

The protests followed the deaths of Breonna Taylor, an unarmed black woman shot by Louisville police in her home nearly three months ago, and the death of George Floyd, a black man who died after a Minneapolis police officer pressed a knee on his neck as he pleaded for air while handcuffed.

Kentucky's smaller-town protests were peaceful but not without opposition. Threats, heckling, pepper spraying and people not part of the protest openly carrying assault rifles all tried to intimidate the marchers.

Protesters in Murray, Kentucky, demonstrate against police violence, with many calling for the removal of a Confederate monument. (Photo: Courtesy Justin Warren)

In Murray, Kentucky, where dozens marched and also protested a Robert E. Lee statue some are demanding be removed, a man drove by, rolled down his window and shot chemical spray at marchers.

Another man was arrested for pointing a weapon toward demonstrators, according to local police.

Some of the first protests outside of Louisville and Lexington late last month were in Paducah, along the Ohio River, where protesters held a “die-in” at a local courthouse, along with Bowling Green, the state’s third-largest city, and Covington, across from Cincinnati.

More protests soon followed, including in college towns such as Morehead and Richmond, and also areas where Black Lives Matter signs are more of a rarity: Paintsville, Barbourville, Elsmere, Ashland, Hazard, Harlan.

“I’d seen the protests going on, starting in Minnesota, and then in Louisville. My heart really ached. I thought, What could we do but also, we’re a small town. I don’t know even where to begin,” said the Rev. Scot Robinson, pastor at the First Presbyterian Church of Pikeville.

By last week he had scrawled “Black Lives Matters” on a sign and joined about 90 others marching through town, listening to a heckler but also thrilled by the turnout of young and old who he said could identify with injustice and prejudice.

“I think it’s kind of a watershed moment. For a long time, people in Appalachia have felt pigeonholed and unfairly judged — that we're all hillbillies and think the same way. But this community was just as upset as the largest community, even if it didn’t happen right here in town,” he said.

In Morehead, home to Morehead State University, marches were led down Main Street by state and local police amid chants of “No, justice, no peace” and “I can’t breathe.”

'You have to admit something is wrong'

In Hazard last week, Courtney Amburgey, 21, said she wanted to protest even though some asked why, arguing it wasn’t her fight.

When she arrived in the remote town, she "was completely astounded. There were hundreds of people there.”

She contemplated what brought people out this time, when protests didn't spread as widely after police shootings such as the 2014 death of Michael Brown in Ferguson, Missouri.

To be sure, attitudes since then have changed. In 2014, only about four in 10 people saw the deaths of Michael Brown in Ferguson, Missouri, and Eric Garner in New York as indicative of broader problems in policing.

“There’s only so much you can see, before you have to admit something is wrong,” she said. “It’s kind of in our blood as well. Appalachia has a rich history of standing up and speaking out against injustices.

"Just last year we had the coal miners protesting in front of the train (after a bankruptcy).”

In Benton, Davis, 35, and her husband Dwaylon Davis, 46, said they decided to try and organize a rally after seeing people derisively comment on a Facebook post seeking support for George Floyd.

Benton, in Marshall County, was once a so-called “Sundown” town, where harassment or discriminatory laws were used against African Americans. In 1908, black residents were driven from town.

In 2016, the county voted overwhelmingly for President Donald Trump.

During the annual Tater Day spring festival, Davis said, people often “ride around with rebel flags.” This spring, a Confederate flag was flown at a county courthouse, but officials removed it after public pressure.

Davis, who grew up in Marshall County and watched the protests spread, wanted to do something. They started planning on a Wednesday, posting to social media and enduring messages instructing her to “leave the county.”

“By Thursday, we had quite a few (expressing interest on Facebook). I said, we might have 100 people,” she said. When the day finally came? Organizers counted more than 300.

As Second Amendment supporters with guns looked on, protesters marched around the city square, laid on the ground with hands behind their backs, recited the names of those shot by police and gave speeches.

“People said, where did you get the speakers? I said, 'We didn’t, they were just moved to speak.'"

One sign read, “Marshall County, it’s past time for racism to end.”

In one moment, a white police officer clasped hands with a black protestor.

Davis, who also helped organize demonstrations in Grand Rivers, said she hopes it will lead to a bigger reckoning with the area’s history of racism, and she is hoping to hold more public gatherings and meetings on race and justice.

That's also happening in other cities across Kentucky such as Ashland. Davis and others said the feeling that a tipping point has been reached has manifested in residents messaging them to ask questions or wanting to help after previously feeling that the issue didn’t affect them.

“We’ve had people say to us, I want to do better,” she said.

Reporter Chris Kenning can be reached at ckenning@gannett.com, by phone at 502-396-3361 on Twitter @chris_kenning.