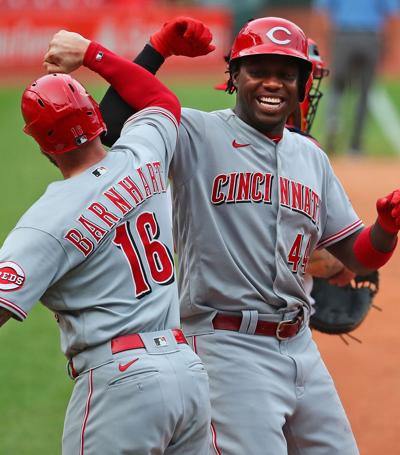 The Reds could no longer afford to kick the can down the road and battle another day. They had to win Sunday's game vs. the Cardinals -- and the series -- to keep their dwindling hopes for the postseason legitimately alive.

It wasn't looking good at first, as the offense played catch-up for much of the day, but the Reds’ breakthrough came during a three-run top of the seventh inning for a 10-5 victory in the series' rubber game at Busch Stadium. It snapped a nine winless series streak since Aug. 7-9 at Milwaukee.

A team that scores the majority of its runs via the home run, the Reds scored their biggest runs Sunday in an unconventional manner. The three-run rally included only one hit, with the tying run crossing on Freddy Galvis' bases-loaded walk and the go-ahead run -- Tyler Stephenson -- coming home on a wild pitch by Andrew Miller. The third run of the frame came on José Garcia's RBI groundout.

The home run swings weren't on vacation, however, and they provided the insurance runs. Eugenio Suárez slugged a two-out solo homer in the eighth and Aristides Aquino connected for his first long ball of 2020 with a two-run drive to right field.