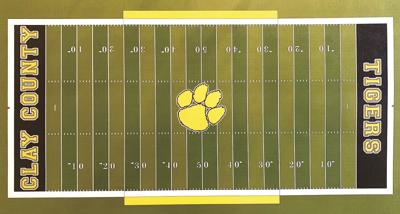 Board of Education members put their stamp of approval on the design of the turf for Tiger Stadium.

JRA Architect firm revealed the design for the new turf during a recent meeting and was met with a rousing stamp of approval.

“I love it,” said vice-chairman Roy Glenn Allen as the architect firm asked the opinions of board members.

The field will have dark and light shades of green every five yards outlined with a heavy white border around the field.  The endzones will be black with gold and white lettering featuring ‘Clay County’ on one end and ‘Tigers’ the other.

Preliminary meetings were held with various school and board officials on the design of the field and the center logo.

Board chairman Mark Hoskins suggested the historic Tiger paw as an option during a preliminary meeting on the design.

“The paw is synonymous with some of our greatest teams in program history,” he said at the meeting.  “We had a tremendous amount of success on the field wearing the Tiger paw.”

The chairman was referring to teams during the 1980’s when the program was considered one of the best in eastern Kentucky.

“Our school has used many designs in the past,” Nicholson said.  “But the Tiger paw is one that’s tied to our past and now our future success.”

Board members were also briefed on the timeline of construction for the Tiger Stadium renovation.

“We will first seek approval from the Kentucky Department of Education,” said Travis Curry, construction manager for Codell Construction performing the work.  “Once approved we will seek bids for the project, once accepted we will start earth work.”

“Weather permitting, we expect to have the new field and goal posts installed before mid-August,” Curry said.

The field won’t be the only thing fans will notice before the upcoming season begins.  New lights will also be installed with an option that set them apart from any field in eastern Kentucky.

That will conclude Phase I of the project, according to Curry.

Once the season concludes Phase II will begin.  The second phase will include the demolition of the current stadium bleachers and earthwork for the future baseball and softball fields.

Due to various underground utilities, the new bleachers will not be installed on the opposite side of the field like originally planned.

The new bleachers will feature concession, restrooms and storage underneath the bleacher area.

Architects are also designing a renovation of the current Tiger complex that will enlarge the football locker room area and incorporate a locker room for track and cross country.

This phase of the project is slated to be completed before the start of the 2022 seasons.

Designs of the new baseball field and Tiger Stadium will be revealed soon.