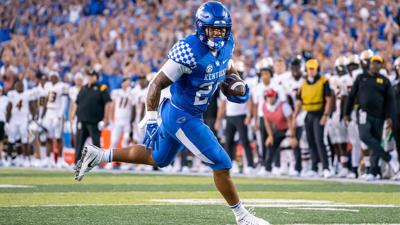 For Rodriguez, both the number of carries and the yards rushing were career highs. The junior from McDonough, Georgia, also caught a pass for a touchdown. His four touchdowns tied a school record.

Will Levis connected on 10 of 18 passing for 179 yards with a touchdown and an interception in the game. Levis' main target was Wan'Dale Robinson, who had a big game in his own right. The Frankfort native led the Cats with 101 yards receiving on five catches. He also had three carries for 73 yards in the game.

On defense, safety Tyrell Ajian led the Cats with eight tackles, while J.J. Weaver had another big game with a sack and two tackles for loss.

Kentucky took the ball first and, on the second play from scrimmage, Robinson took the jet sweep for 64 yards to the Missouri eight yard line. From there, it was a five-yard touchdown pass from Levis to Rodriguez for a touchdown. Matt Ruffolo added the PAT and Kentucky grabbed an early 7-0 lead with 12:52 still left in the first period.

After a Missouri punt, Kentucky put together its second scoring drive of the game. The Cats marched down the field, using a nice balance of rushing and passing to cover 80 yards in 12 plays, while taking more than five minutes off the clock. The drive ended on a two-yard rushing touchdown from Rodriguez, followed by a Ruffolo PAT, giving the Cats a 14-0 lead with 5:13 left in the first quarter.

Missouri would answer with a long, sustained drive of its own. The Tigers used 10 plays to cover 75 yards, ending with a six-yard touchdown pass from Connor Bazelak to Daniel Parker, Jr. The PAT by Harrison Mevis was good and the UK lead was trimmed to 14-7 with 27 seconds left in the first period. That would be the score after 15 minutes of play.

After another Missouri punt, the Cats went on the march again. Kentucky got a couple of first downs before the biggest play of the drive, a 49-yard completion from Levis to Robinson, getting UK inside the Missouri 10. From there, it took just two plays for the Cats to hit pay dirt, this time on a three-yard rush by Levis. Ruffolo added the point after and the Cats grabbed a 21-7 lead with 9:26 left in the half.

Missouri would punt again with its next possession and Kentucky once again drove down the field. The Cats appeared to be going in for yet another touchdown but Rodriguez fumbled at the goal line and Missouri recovered in the end zone for a touchback with 1:41 left in the half.

The Tigers would take advantage of the miscue. Missouri went into two-minute mode and got into scoring territory fairly quickly. MU covered 80 yards in nine plays and just 1:37 off the clock, culminating in a 17-yard touchdown pass from Bazelak to Keke Chism with just four seconds left in the half. Mevis added the PAT at the Kentucky lead was cut to 21-14. That would be the halftime score.

Missouri took the opening possession of the second half and, on the second play from scrimmage, Bazelak was intercepted by UK linebacker Jacquez Jones, giving the Cats the ball at the MU 38.

On UK's second play from scrimmage on the ensuing drive, Rodriguez scampered 31 yards down the left sideline to the Missouri three yard line. Rodriguez then finished it off himself, scoring from three yards out to extend the UK lead. Ruffolo's PAT was good and the Cats led 28-14 with 13:19 to play in the third.

Once again, Missouri had an answer. The Tigers took the ensuing kickoff and went 75 yards in 10 plays, getting into the end zone on a Bazelak-to-Parker six-yard touchdown pass. Mevis added the point after and it was 28-21 with 9:15 left in the third.

The next three possessions ended in punts before Missouri put together a good drive near the end of the third quarter. As the period expired, MU appeared to be on its way to scoring. As the fourth quarter began, the Tigers got inside the UK red zone. But, facing third-and-14 from the 17, the drive appeared to stall. That's when Bazelak hit Tyler Badie on a screen pass that went for a score. Mevis made the extra point to tie the game at 28-28 with 13:11 to play.

Kentucky got the ball back and quickly moved into Missouri territory. After an 11-yard completion from Levis to Robinson, Rodriguez rushed up the middle for 28 yards, eclipsing his career high in both carries and yards rushing on the same play. Levis then connected with tight end Justin Rigg for a 28-yard completion, getting the ball to the MU eight. From there, Rodriguez scored for the fourth time on the night, on an eight-yard rush, with 11:28 to play. Ruffolo's PAT was good and the Cats had a 35-28 lead.

Leading by seven in the fourth quarter, it appeared that Kentucky was going in for a game-clinching score. But the drive stalled and Ruffolo's 37-yard field goal was blocked, giving Missouri the ball at their own 45 with 2:07 to play.

Missouri took possession hoping to drive for a tying score. But after getting one first down, the MU drive stalled and on fourth and 13 from the UK 45, Bazelak's pass fell incomplete, giving Kentucky possession.

Levis would take a knee on three straight plays to seal the game.

Kentucky returns to action next Saturday, facing Chattanooga at Kroger Field. Kickoff is set for noon ET and the game will be seen via an online only broadcast.