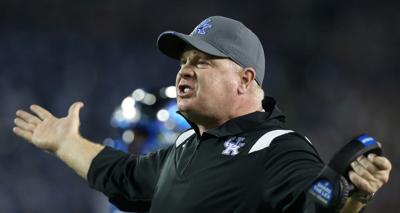 (LEXINGTON, Ky.) – Kentucky’s 42 – 21 beatdown over LSU last Saturday night vaulted the Wildcats into the rarified air of the SEC elite. With the win, Kentucky (6 – 0, 4 – 0 SEC) joins Georgia (6 – 0, 4 – 0 SEC) as the current conference kings of the hill, setting the stage for a titanic clash of the unbeatens this upcoming weekend.

With new-found success, however, comes added responsibility for the Wildcats under head coach Mark Stoops. No longer can his program hide under the anonymity of the middle of the conference pack. Having climbed to No. 11 in both the AP and Coaches polls this week, Kentucky finds itself staring directly into the glare of the national spotlight. The heat doesn’t get any hotter than having to play the No. 1-ranked team on their own home turf.

Not surprisingly, the Kentucky football program finds itself at a crossroad of sorts. Behind them trails an impressive wake of significant accomplishments. The team is 6 – 0 for the first time in 71 years and only the fifth time in school history. They’re on an eight-game winning streak (dating back to last season), and their five-game SEC winning streak is the longest since winning ten in a row back in the mid-70s. They’re also already bowl eligible, meaning they’ll soon set another school record of six consecutive bowl appearances. Stoops himself is only five victories away from tying the legendary Paul “Bear” Bryant for all-time UK head coaching wins (60).

Up ahead of the team, many lofty and formidable challenges remain: an SEC east title, a conference championship, a New Year’s Six Bowl, the College Football Playoffs and a National Championship. Will Kentucky keep surging forward into the upper conference echelons alongside Alabama, Florida, and Georgia, or will they wilt back into obscurity with the likes of Missouri, South Carolina, and Vanderbilt?

It all begins this Saturday at 3:30 pm in Sanford Stadium in Athens. The encounter between the hedges promises to be a high-stakes battle with the winner gaining the upper hand in a likely date with destiny.

I’m not saying this is a must win for the Wildcats—far from it. But it is a must perform game for Stoops and crew if they want to move the program needle. They’ve got to show the football world that they can compete with the cream of the crop on the biggest stage imaginable. Both College GameDay and SEC Nation will be in Athens broadcasting every breath, burp, and belch coming from the Big Blue camp. Kentucky certainly can’t afford any sort of letdown on national television. Under such intense scrutiny, embarrassing meltdowns or blowouts can set the program back twenty years.

Kentucky’s defense is solid enough and has been playing well enough to keep Georgia’s offense in check. Over the course of the season, Brad White’s unit has been solid, dependable, and efficient. Their sum total has frequently been greater than that of their individual parts. Trust me, they’re good enough.

It’s the other side of the ball, however, that raises the pucker factor for me. Georgia’s defense is certifiably elite, especially up front. In fact, the Bulldogs “D” is ranked No. 1 in the entire country, giving up a paltry 203.5 yards per game with only 66.5 of those yards coming on the ground. Their front seven is chock full of future potential NFL stars.

Will Levis, Chris Rodriguez, and the Big Blue Wall have a huge challenge ahead of them. Few pundits think Kentucky can move the ball, much less score. The word out of Vegas actually has Georgia favored by a ridiculous 22.5 points. No one seems to be giving the Cats much of even a puncher’s chance.

If grasping for positives, you can point to the fact that Georgia really hasn’t faced many strong offenses this year. Rodriguez and fellow running back Kavosiey Smoke form a dynamic duo that’s hard to simulate. Both cracked the 100-yard rushing barrier against LSU. Levis was efficient, playing what I thought was his best game of the season thus far. Most importantly, the Wildcats seem to have shed the turnover bug that plagued them early on.

It’ll take almost a perfect game for Kentucky to pull this one off. A lucky bounce here or there certainly won’t hurt either. Is a marquee matchup such as this something that propels the program to the next level, or will a woodshed beating send the Wildcats back into the bowels of mediocrity?

In his weekly Monday meeting with media, Stoops was asked about the significance of this game. He refused to bite, giving his usual stock answer about preparation, discipline, and staying the course.

“For us it’s another week,” he deadpanned. “It’s the next game so for us we just have to have a great week of preparation and continue to get better, continue to cultivate the good things we’re doing.”

And how about heading into the lion’s den to face the No. 1-ranked team in front of 90,000 screaming red and black-clad fans? Does his team have what it takes to prolong the magic?

“You know you’re going into some tough environments, so you better embrace it,” Stoops answered with a twinkle in his eye. “I said it a long time ago in one of the games, but ‘Run to the roar, man, enjoy it.’ You are going to hear it, there will be rocking. You better embrace it and play at a high level, because you can’t hide from it.”

Kentucky won’t run and hide in this one. Cats puts up a valiant fight, but Georgia prevails 21 – 10.

Dr. John Huang is a columnist for Nolan Group Media and editor-in-chief of JustTheCats.com. His new book, CUT TO THE CHASE, is now available on Amazon. His newest Kentucky Basketball book, KENTUCKY PASSION, is scheduled for an October 19th release. If you enjoy his writing, you can follow him on Twitter @KYHuangs.

A Soldier is Laid to Rest - The Final Chapter in the Journey of PFC Berton J. McQueen