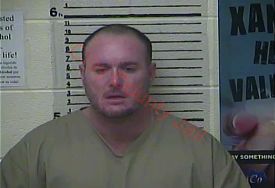 Clay County Sheriff Patrick Robinson is reporting that on May 15, 2020 at approximately 9:00 PM Clay County Sheriff Deputy Kendric Smith along with Deputy Coty Arnold and Deputy Jared Smith arrested Scotty Sandlin, 45 of London. The arrest occurred when Deputies received a complaint of a possible intoxicated driver on South Highway 421. Deputies made contact with the vehicle that matched the description given by Clay County Dispatch. Deputies conducted a traffic stop on Paces Creek Road, contact was made with the driver and through an investigation it was determined the subject was under the influence. The driver was transported to Advent Health Manchester where he refused to submit to a blood test. Assisting at the scene was Manchester City Police K9 Officer Ryan Jackson, Kentucky State Police Trooper Wayne Estep and Kentucky State Police Trooper Shawn Boroviak.

Scotty Sandlin, 45 was charged with:
• Operating Motor vehicle under the influence of ALC/DRUGS/ETC